Hidden Figures: Such an important story, so beautifully told. 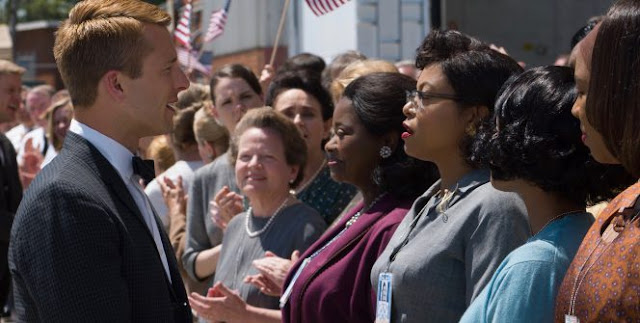 Based on Margot Lee Shetterly’s book of the same name and the true story of Katherine Johnson, Dorothy Vaughn, and Mary Jackson, “Hidden Figures” is an inspirational film about three brilliant and extraordinary pioneering Black woman who fought racism and sexism in 1960s Virginia and became essential contributing members of NASA during the height of space exploration. Beginning as computers at NASA’s Langley Research Center, these three outstanding (and overqualified) women went on to become groundbreaking mathematicians, engineers, and programmers that would help NASA get ahead in the Space Race and beyond. Their hard earned victories and well deserved recognition, belated though it may be, are the compelling focus of the film.

The star filled cast gives exceptional performances led by the amazing and multi-talented Taraji P. Henson, Octavia Spencer, & Janelle Monáe. Taraji (I’m going to call them by their first names cause we cool like that) shows us again- just in case we forgot- how amazing and diverse her acting abilities are. Jumping off from her current consistent role and image as lovably crazy, in charge, and flashy Cookie Lyon to nerdy and adorable math whiz Katherine Goble/Johnson, all while maintaining that same ferocity we’ve become accustomed to (gleefully) receiving from her. Octavia is ever the inspiring and powerful queen she always is; I don’t know about you but I am so ready to see her play God. And Janelle...triple-threat, quadruple-threat, I don’t even know what to call her any more; from her film debut in “Moonlight” (in which she previously worked alongside fellow HF co-star Mahershala Ali) to her role as the trailblazing Mary Jackson, Ms. Monáe is working the stage-to-screen transition. Mahershala Ali expands on the chemistry previously established in “The Curious Case of Benjamin Button” with Taraji to deliver a bit of sweet romance to the film. And Kevin Costner, Jim Parsons, Kirsten Dunst and the rest of the cast offer great support to our protagonists’ stories as well as great assists and targets for the film’s many points of comic relief.

It’s the age old story of triumph in the face of adversity, but in a story that hasn’t been told before, with heroes whose stories we’re not used to hearing, but ones we most definitely need.

So take your friends, take your family, and MOST DEFINITELY take your children to see “Hidden Figures” today!