“The Founder” or The Fast Food Social Network. 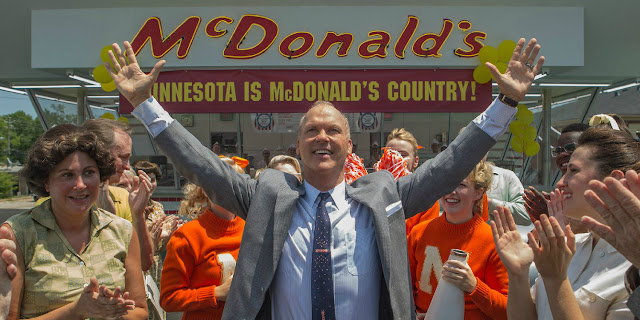 “The Founder” tells the story of the founding and franchising of one of the world’s largest and most recognizable restaurant chains, McDonald’s. With a (likely intentional) slow start in which we are introduced to Ray Kroc (Michael Keaton), an Illinois businessman and traveling salesman with ambitions beyond that of his slow, comfortable, and quiet little life and a various array of attempted business ventures to achieve them, the most recent being the selling, or lack thereof, of Prince Castle (falling under to Hamilton Beach) milkshake mixers. To Ray’s good, and unexpected, fortune he receives a large order for his mixers from a burger restaurant in San Bernardino, CA. Driving across country to check the place out for himself, Ray- frustrated with his regular and consistently shoddy experiences with the inefficient drive thru restaurants of the time- discovers what he later determines could become “the new American church”, McDonald’s hamburger diner. Witnessing the large but quickly moving lines, tasting the delicious burger (and fries), and seeing the euphorically satisfied families of customers, Ray is fascinated by the efficiency and success of the (newly defining) fast food restaurant. After meeting entrepreneurial brothers Mac and Dick McDonald (John Carroll Lynch and Nick Offerman), receiving a tour of the restaurant, and hearing the story and innovative thinking behind their founding of the restaurant, its “speedee service system”, and awe-inspiring “golden arches”, the wheels in Ray’s profit-seeking mind start turning as he dreams up a new business venture between he and the brothers who after some convincing, though reluctant and with prior bad experiences, agree to take Ray on as a- contractually limited- partner in franchising McDonald's.

Rushing in headfirst and headstrong Ray begins quickly expanding the chain and dealing with the growing pains of doing so. To open his first franchise restaurant at home, he applies for loans with multiple banks that- familiar with his previous unsuccessful business schemes- refuse him. He faces frequent arguments with and lack of idea approval from the humble and wary brothers who fear that his too many and too quick changes, though they may be business savvy/good for the bottom line, would put the quality and name of McDonald’s (that they worked hard to establish) at risk. And finding and navigating the franchisee relationships proves more difficult than he originally expected. And though he finds a way to deal with these issues and build the McDonald’s brand and reputation, he’s unsatisfied with the lack of substantial profit he’s seeing, partly due to the limitations of his contract (and relatedly, the brothers’ refusal to approve certain cost-saving and profit-increasing ideas). Playing up his own involvement in the company’s “founding”, partnering with savvy financial consultants, and lawyers, a frustrated and greedy Ray begins finding ways to increase his profits and control over the franchise that go around the brothers’ “purview” and, with the newfound success of his own endeavors and positing himself as the face of and mind behind McDonald’s, begins looking for ways to cut the brothers out completely.

What follows is the compelling, stomach turning (in more ways than one) story of business and betrayal that likens “The Founder” to a fast-food restaurant oriented version of “The Social Network”, with less legal vindication, consolation, and story closure.

Keaton is perfect as Kroc, inspiring initial sympathy and understanding in the frustrations of the unfulfilled (though partially just unsatisfiable) man still trying to find his passion and pursue ambitions late in his life, earning respect for the efforts, determination, and forward thinking that lead to his success, but then eventual anger and even malice- maybe mixed in with a bit of begrudging respect depending on your (professional) personality- for the behavior and that same, yet increasingly twisted, ambition (and sense of morals) that gets him there. Lynch and Offerman offer charming and sympathetic, if at times a bit melodramatic, performances as the humble and seemingly incorruptible McDonald’s brothers.

In the end, though we feel for them and are upset at how wronged they were, maybe even a bit outraged by it, we can’t help but look back (in hindsight of course) at the places THEY went wrong; all the ways they could have prevented themselves from getting so majorly screwed over and even have ended up riding the massive wave of success of the business they started. But a lot of those ways would, if the script was true to the character of the brothers, have forced them to compromise who they were (their morals, their integrity, their brand) and tarnish the “glorious” name of McDonald’s. But, as Ray questions in the end (the answer to which he makes a point to drive home in the final scenes) who really has the name anyway? As Ray and “The Founder” posits and proves (in a somewhat both satisfying and unsatisfying/upsetting way), when it comes to the cycle of business, wealth, and success, it’s a dog-eat-dog (or maybe more appropriately kroc-eat-kroc) world and to the victor go the spoils. And, as the story and symbol of McDonald’s, that’s America...and, sadly, probably one of the truest and greatest stories of attaining “the American Dream.”

I don’t know what their true characters were like, but I felt like the brothers were played a little too naively and melodramatically at times. I would have liked to see a greater level of emotional depth from all the characters, even Ray seemed to be too inhuman and too human (in the basest form) at the same time.
_________________________________________
Posted: January 20, 2017
Labels: LizMassele, Reviews17
Newer Post Older Post
Subscribe to: Post Comments (Atom)
Subscribe to Mind on Movies for Movie Screenings and Giveaways.