Enter to win an Admit-Two Pass to see Newsies!
Mind on Movies is very excited to announce that we are working with Fathom Events on Newsies, in selected theaters on Saturday, February 18th, 2017 12:55pm ET, to giveaway an admit two to select winners. 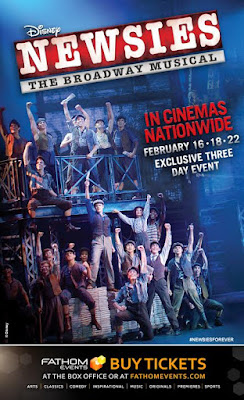 Straight from the Broadway stage, Fathom Events and Disney Theatrical Productions are thrilled to bring the Tony Award®-winning musical NEWSIES to cinemas nationwide in an exclusive three-day event on February 16, 18 and 22.

Filmed live on stage at the Pantages Theatre in Hollywood, CA, this not-to-be-missed high energy show stars Original Broadway cast members Jeremy Jordan as “Jack Kelly,” Kara Lindsay as “Katherine,” Ben Fankhauser as “Davey” and Andrew Keenan-Bolger as “Crutchie”. They’re joined by North American Tour stars Steve Blanchard as “Joseph Pulitzer,” and Aisha de Haas as “Medda Larkin,” and Ethan Steiner as “Les” along with members of both the Broadway and North American Tour ensembles, filling the stage with more “newsies” and more dancing than ever before.

Set in New York City at the turn of the century and based on a true story, Newsies is the rousing tale of Jack Kelly, a charismatic newsboy and leader of a ragged band of teenaged ‘newsies,’ who dreams only of a better life far from the hardship of the streets. But when publishing titans Joseph Pulitzer and William Randolph Hearst raise distribution prices at the newsboys’ expense, Jack finds a cause to fight for and rallies newsies from across the city to strike and take a stand for what’s right.


Enter below to win!
a Rafflecopter giveaway
Disclaimer: Only one entry per mailing address per giveaway. The prize will be sent via FedEx or UPS. No P.O. Boxes please. This contest is from Mind on Movies working with Fathom Events. The entries will be checked. You must do what it says on the widget option to enter to win.
Posted: January 27, 2017
Labels: Expired Contests
Newer Post Older Post
Subscribe to: Post Comments (Atom)
Subscribe to Mind on Movies for Movie Screenings and Giveaways.