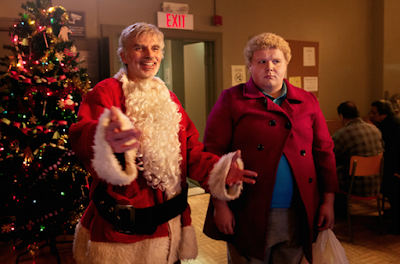 Movie Info:
BAD SANTA 2 returns Academy Award®-winner BILLY BOB THORNTON to the screen as America's favorite anti-hero, Willie Soke. Fueled by cheap whiskey, greed and hatred, Willie teams up once again with his angry little sidekick, Marcus (TONY COX), to knock off a Chicago charity on Christmas Eve. Along for the ride is 'the kid' - chubby and cheery Thurman Merman (BRETT KELLY), a 250-pound ray of sunshine who brings out Willie's sliver of humanity.
Mommy issues arise when the pair are joined by Academy Award®, Golden Globe and Emmy-winner KATHY BATES, as Willie's horror story of a mother, Sunny Soke. A super butch super bitch, Sunny raises the bar for the gang's ambitions, while somehow lowering the standards of criminal behavior. Willie is further burdened by lusting after the curvaceous and prim Diane, played by Emmy Award-nominee CHRISTINA HENDRICKS, the charity director with a heart of gold and libido of steel.
Bad Santa 2 opens in U.S. theaters on November 23, 2016.


Enter below to win!
a Rafflecopter giveaway
Disclaimer: NO PURCHASE NECESSARY. Limit one (1) admit-two e-pass per person. This film is rated R. Must be 13 years of age or older to win passes. Employees of all promotional partners and their agencies are not eligible. Void where prohibited. Entries must be received by Midnight, November 20th, 2016 to be eligible to receive pass. Winners will be contacted via e-mail to receive their e-pass. Sponsors not responsible for incomplete, lost, late or misdirected entries or for failure to receive entries due to transmission or technical failures of any kind. SEATING IS LIMITED, SO ARRIVE EARLY. PASS DOES NOT GUARANTEE A SEAT AT THE SCREENING. Refer to screening pass for further restrictions. ONE ENTRY PER PERSON.
Posted: November 16, 2016
Labels: Past Screenings
Newer Post Older Post
Subscribe to: Post Comments (Atom)
Subscribe to Mind on Movies for Movie Screenings and Giveaways.