Review: Bleed for This

Bleed for This packs a punch with Miles. 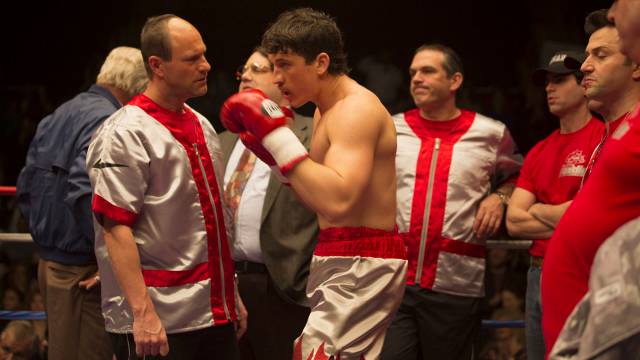 Bleed for This is the movie about World Champion Boxer Vinny Pazienza who, after a near fatal car crash, leaves him not knowing if he'd ever walk again. This is a movie that won't be taken lightly, as you see somethings that might make you tweak in your seat when you see it on the screen.

Miles Teller, who plays Vinny Pazienza, brings his Oscar performance face in Bleed for This. He knows how to please a reviewing audience, who will determine if he should be nominated or not for an award. I agree that he should probably be nominated for something, an Oscar, I'm not sure that's it though. Maybe he should be offered a different award, something of a lower value.

You now who else brings there Oscar performance is Aaron Eckhart. He looks so different in this movie, with his hair line and what I assume is a belly suit because it looks like he has gained like 25 pounds. He is the trainer who helps Vinny through his hard time. Aaron Eckhart brings it for sure.

If I were you, I would go and see this movie, even though it has some moments that are hard to watch. It is something that shows you what someone in real life is capable of, since it's based on the true story. It was a hard process for Vinny to get back to fight, and when you watch him do it, it will make you feel like anything is possible.