Can Bad Santa live up to himself from 13 years ago? 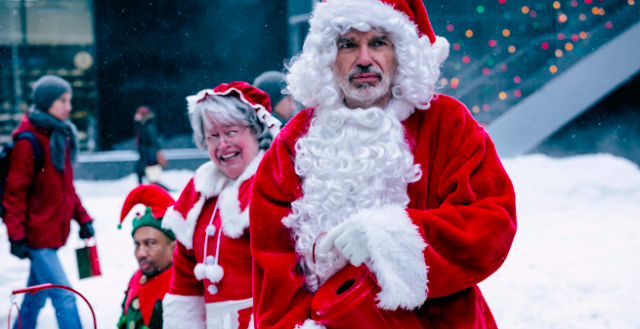 Bad Santa 2 is the sequel that puts Willie Soke back in the famous red Santa suit. Willie is just trying to get by in life when Marcus, along with Willie’s mother, contacts him to once again help commit a robbery during Christmas time, however this time at a charity in Chicago.

13 years after its predecessor, this movie is perfect for the satirical, raunchy comedy Christmas movie lover. Just like the first one you will be in for non-stop laughs from just about all the characters. The relationship between Willie and Marcus is still one of pure comedy mixed with the tension of potential betrayal since they are both criminals and looking for anyway to make a quick buck off someone else.

They also brought back Thurman Murman as a 21-year-old who is just as awkward and strange as he was as a kid. His character serves more than just bringing laughs because he is probably the only person who can appeal to the sliver that is Willie’s soft side and brings the Christmas spirit to his life, if only for a split moment.

The comedy in this movie isn’t for everyone since it does tend to be on the vulgar side. I will say that the plot took a back burner against the comedy of the movie. That being said however, if you liked the first Bad Santa or movies that have rude humor then I would definitely recommend that you watch Bad Santa 2 this holiday season.

Also stick around a little while for the Instagram clips they added to the end of the movie which adds to the comedy.