Is Arrival worth your Arrival to the Theater this weekend? 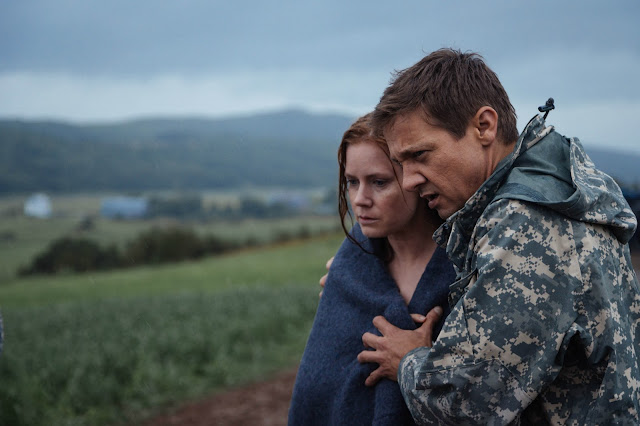 What starts as your average film we get a morbid background story and a lifeless Amy Adams. She is the top linguist in the world and the US military needs her help to communicate with unknown lifeforms that have popped up around the world. For convenience purposes and the sake of fact checking Adams already has top clearance translating for the government before. In what starts out to be a slow and dragging first half of the film we are introduced to the issue at hand, what are these in Adams own words “well are we going to say it, or not aliens” here for and what do they want? That is the premise of the film and the world has to work together to solve this mystery.

There is a sense of urgency but the film is too slow for that urgency to make the viewer anxious to find out what's at stake. If anything I was more concerned with what the aliens looked like and if they would try to one of independence Day: Resurgence. Before you continue reading, if you’re looking for a crazy action packed alien film this is not it. This is not to say that the film is flawed, it is just not a summer blockbuster. As someone who went into this film knowingly that it would not be an action film I was not let down. The plot takes its time to reveal what the aliens want and why there are 12 ships around the world. The ships only open once every 18 hours and when they do open the amount of time they can spend in there is very limited. The first time Adams and Renner enter the ship they see the aliens and we jump to the next scene so that the plot isn’t completely spoiled. Throughout the film we are teased by what the aliens really want and lets be honest it’s a science and we aren’t going to figure out what they want overnight. Adams makes Renner look useless, and he is not only does his character contribute next to nothing to the plot, but he is only there to serve as a talking character for Adams so she doesn’t look crazy talking to herself about these aliens.

Re-reading my own review it may seem like a negative one, however this sci-fi genre plays to its advantages of keeping the main plot a secret. The secret is so well hidden that you only find out what it is in the very final scenes of the film. It is difficult to compare this film to others because most of them haven’t sailed the same waters as Arrival and for good reason. Would you rather go into this film expecting another action packed flick with nothing to offer to the actual plot, or would you have an actual sci-fi thriller that approaches things rationally and direct? You have to decide because if it is the aforementioned you will be disappointed.


There seemed to be a lot of confusions with the constant flash backs Adams gets throughout the film. They are filmed so well that half the audience (when it comes to the big reveal) still doesn't quiet understand that they were flashbacks all along. And does Adams really need a love interest in a movie so dark? The world is at risk of ending and when it is all said and done she just shacks up with Renner and starts a family? Its 2016 and its time for a girl to be single and proud. Now of course that is what I would change, because if it wasn't for Renner she wouldn’t even have the child all of these flashbacks are about.
_________________________________________
Posted: November 11, 2016
Labels: JonathanJimenez16, Reviews16
Newer Post Older Post
Subscribe to: Post Comments (Atom)
Subscribe to Mind on Movies for Movie Screenings and Giveaways.