Watch the new movie Vanished: Left Behind Next Generation. 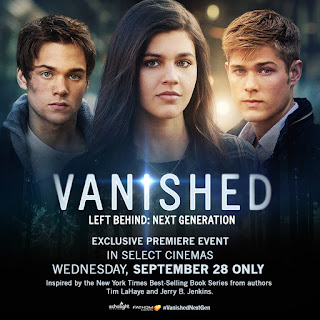 You can see Vanished at select theaters on Wednesday, September 28th at 7pm.
Mind on Movies will be giving away tickets to winners for the theater that is closet to them.

Synopsis: When a billion people around the globe suddenly vanish and chaos engulfs the nation, headstrong 15-year-old Gabby is thrust into adulthood way too soon. The event forces Gabby, along with her younger sister Claire and the two teen boys vying for Gabby’s affection, Josh and Flynn, to try to figure out what has happened and how they fit into this dangerous new world.

After the premiere screening of the film, lead cast members, Amber Frank, Dylan Sprayberry, Mason Dye, Keely Wilson and the film’s producers, Randy LaHaye (grandson of Tim LaHaye) and Dave Alan Johnson are scheduled to sit down with nationally known youth leader, Doug Fields, for an exclusive discussion about the making of the movie and the plans for future films in the franchise.