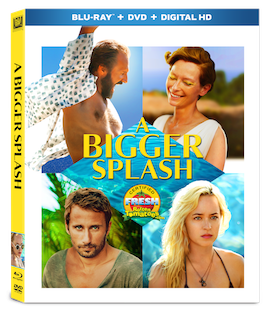 Fun fact about this film is that initially Tilda's script came with lines, but she quickly told the screenwriter and director that she wanted to remove her character's ability to speak, which completely changed the direction of the film. We have a clip that illustrates how she transformed the storytelling.

It's certified "Fresh" on Rotten Tomatoes and was 2015 Venice Film Festival's Official Selection. It's a provocative story of emotional betrayal and sexual desires about a famous rock star (Tilda's costumes by Dior with pieces from Raf Simons') vacationing with her lover on a beautiful remote Italian island of Pantelleria where she welcomes an unexpected visit from a lusty ex-boyfriend along with his seductive daughter.