Enter for A Chance to Win A Pass for 2 to see “Hands of Stone” in Orlando! (Ended)

Enter to win a pair of passes to see Hands of Stone in Orlando! 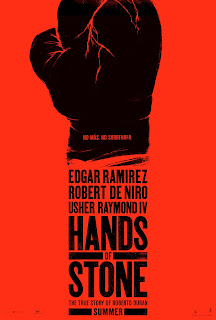 SYNOPSIS:
HANDS OF STONE follows the life of Roberto Duran (Edgar Ramirez), the Panamanian fighter who made his professional debut in 1968 as a 16 year‐old and retired in 2002 at the age of 50. In June 1980, he defeated Sugar Ray Leonard (Usher Raymond) to capture the WBC welterweight title, but shocked the boxing world by returning to his corner in their November rematch, famously saying the words “no mas” (no more.)

Disclaimer: Passes are first come first serve. This contest is from Mind on Movies working with The Weinstein Company. Once the link is sold out, all passes have been redeemed.
Posted: August 08, 2016
Labels: Past Screenings
Newer Post Older Post
Subscribe to: Post Comments (Atom)
Subscribe to Mind on Movies for Movie Screenings and Giveaways.