Carrie and Wizards of Waverly Place are almost the same. 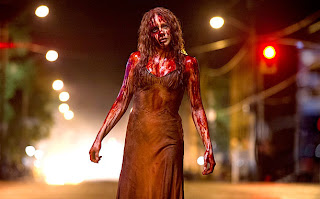 How can this be you ask, well Wizards of Waverly Place is about a young wizard who is trying to balance her powers, fit in at school, and boys. Which really is what this updated version of Carrie is. If you have time to see this movie, don't. It will be my goal to get you not to see this movie. There were way too many things that happened in the movie that if it was done how it normally is done, Carrie wouldn't have had her Prom incident.

They did make this version in the year 2013. Which is good. The only problem was, that the technology was brought up to date, the characters and school were not. Let me list a few of these examples.

- The most important scene at the beginning of the movie, were Carrie had her period in the locker room, yet she doesn't know what's going on is incorrect. In public education it is required for all students to take a credit of health class in high school. If she did, which is required, she would know what a period is and what to do.

- When Carrie is losing her mind in the locker room with her period, the gym teacher feels it's necessary that Carrie needs to be slapped. Although she probably did need it, that teacher went unpunished after doing so. Now you may say, she needed to be slapped or she wouldn't stop yelling, let me prove you wrong. LINKED HERE is an article from the Huffington Post about a teacher named Pat Frost, she slapped a student in self defense who was coming at her. She was suspended without pay and terminated.

- In English class, Carrie was asked to read her favorite poem. The teacher did two things wrong. First after the poem was read, he made fun of the selection Carrie choose. Teachers today would have been supportive that she did get up their and read her poem to the class. The next thing is he gave this look to a girl student in the class like they were "together." Now today if that were happening, the whole school would know about it and that teacher would be fired and in jail.

- Did the students who killed the pig to get its blood feel it was necessary to smashed the pigs head with a sledge hammer. Ideally if they went to the farmer and asked him after he slaughters one, if they could have its blood for a science project, I'm sure he would have gave them some. Or why couldn't they just bought some fake blood at a store. Don't support animal cruelty.

Now the great thing in this movie was the acting. All the actors did such a great job getting into their character and keeping the audience focused on what was happening.
If you do end up watching the movie let me know how you feel in the comments below, I'd love comment back on how your wrong. 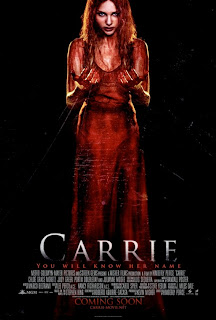 What would I have changed? (Spoilers)
Well other than what was stated above, none of this would have ever happened. Kids are not that mean where they would have done all of this to other students. Maybe they did this back in the 70s. But in today's day and age schools would have more then the 2 teachers and 1 principle we saw. There wouldn't be any bulling, most all schools today have a 0 tolerance policy.