SAVANNAH is the true story of Ward Allen, a romantic and bombastic character who rejects his plantation heritage for the freedom of life on a river. Ward navigates the change of early 20th century America on the wrong side of the law and society, his loyal friend, a freed slave named Christmas Moultrie, at his side. Master of Shakespeare, and the shotgun that provides Savannah's markets with fowl, Ward fights for his rights as a hunter. His charisma and eloquent rhetoric win the heart of a society woman who defies her father to marry him. An elderly Moultrie tells the story of life on the river with his friend to a little boy, who passes the legendary Ward Allen down to the next generation.

Mind on Movies has passes for free tickets to see Savannah before the general public is able to catch it.
All you need to do is enter the widget below
a Rafflecopter giveaway 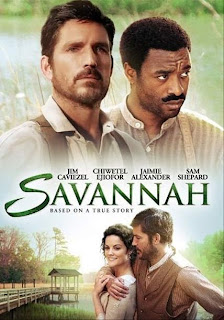 The free screening of Savannah will take place at The Maple Theater in Bloomfield, MI at 7:30pm on Tuesday, August 6th.

Contest Rules: Only enter if you live in Michigan. Winners will be chosen at random and seating is on a 1st
come 1st serve basis. Please arrive early, but there is no need to arrive crazy early. Winners will be notified on Monday August 5th. Enjoy the film if you win.