Jim Carrey is one of the more well named stars in the new movie Kick Ass 2, releasing tomorrow. As you may already know he has pulled himself out of the campaign for the movie. 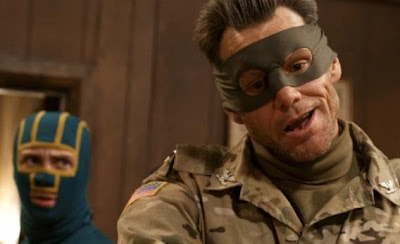 A little back story for those that don't know.
Jim Carrey’s nonsupport for the movie came after his outspoken position on violence in films and video games following the Sandy Hook shooting. He was subsequently maligned for appearing in Kick Ass 2, a film in which violence is seemingly fun, which lead to him withdrawing from promotional work for the film.

Jim Carrey's character ironically is a born-again Christian who refuses to carry a gun because he doesn't want to be a negative role model for children. So even his character in the movie is not all that bad. Good job Jim Carrey, as to not support this movie, you actually supported it.