Can Adam Sandler make a sequel worth seeing?

Ideally this movie is great no matter what your age is. Shaq has a semi large role in this movie, and you will be happy to see him. Not only is Shaq himself able to pull off some laughs, but they can poke fun about his basketball career and you will all laugh when you hear it.

And when you see your first bursnart, you won't be able to unsee it, and you won't want to. So you know, this movie isn't all farts like the first movie. Just some farts.

You will be impressed that this entire movie takes place in one day. Make sure you remember that as you watch it. It's the last day of school and that's all we see. You will want to see this one as soon as you are able to, it is that funny.

Let me know who your favorite Grown Up is below. 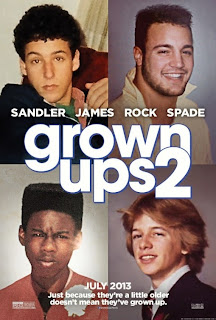 Third Movie Idea...
This is all my opinion. They actually left this movie open to create another movie. They could make another movie were they show Lenny with his new kid and show how he deals with that. Another idea they could do is showcase each family on Netfilx. Each one of them get a thirty minute episode on just their family.

If you have any ideas let me know in the comments below.