The Way Way Back

As surprised as I was, this is really a must see movie experience. I actually thought this movie would be a slow moving tortoise. This movie was a great coming of age movie, about a kid who is treated like he doesn't exist, makes some older friends from unexpected people. Sam Rockwell played the character Owen, a manager of a water park in the nearby area.

Sam Rockwell is the star of this movie. He is truly a talented actor. He was able to play a funny role while still making some kids feel like they are needed. Rockwell needs to play more roles like this. I think this is his key into his most success. Steve Carell was also in this movie, he played the mom's new boyfriend. Carell's character was more dark and set back. He had no comedy in this movie at all. I did not like him as this character. Ever since Steve Carell decided to leave comedy he has really gone downhill.

The movie has really great chemistry between the characters. They all seemed like they have been friends forever and all clicked correctly. I would suggest that you to see this movie this weekend. It can really appeal to anyone.

What Would I have Changed? (Spoilers) 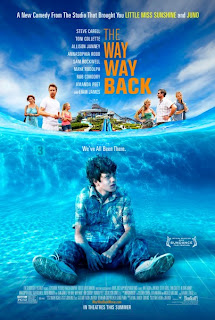 Well I would have cast Steve Carell as a wacky neighbor, not so much the father figure he had. I would have also ended the movie. They left it with the mom and son in the "way way back" of the car. But we don't know if they make a new life for themselves or what. The relationship between Duncan and Susanna were a big let down, they didn't do anything with it.