Can two women in their 40's pull off a comedy? 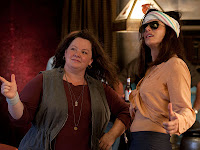 First off, this movie is so good that before it is even out, (released today, June 28th) they are making a sequel.

You have to catch The Heat as soon as you have a chance to see it. This movie is almost non stop laughs that you will want to see it soon. Melissa McCarthy and Sandra Bullock were such a great combo in the movie. They just clicked so well together. They are like old girlfriends who have been working together forever.

Melissa McCarthy was really the funnier of the two. Without her, this movie would not be as funny as it was. Sandra Bullock brought in her great "stuck up" attitude for this type of movie, which really added a good kick to her comedy in the movie. Marlon Wayans was a nice surprise to see in this movie. The very small parts he was in were so funny, he was a very nice added bonus which just added more funny features to this movie. 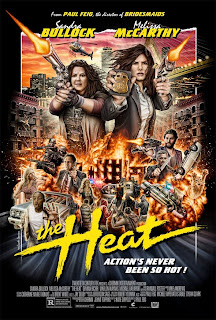 What would I have changed? (Spoilers)
I would have involved Marlon Wayans more in the movie. He could have been such a great impact on the film, I hope they use him more in the sequel. Other then that, this movie was really funny, and well done. They knew what they were doing when they made this movie.