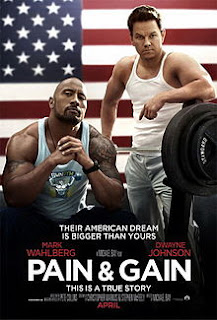 Its all about that American Dream.

This movie was not quite what I expected. If you saw the trailer then you know it's about body builders who want to have it all, by robbing a rich guy. But there's actually more to the movie then that. This movie had its bumpy roads, were sometimes it was like, no one would do that. But I'm glad for those parts, as they were the comedy points in the movie. That was the shining moment of this movie. It was actually really funny. There was maybe a total of 4 minutes, were it was to much gore. But other then that this was great.

The movie really taught you how bad life was in 1994-95. But at the time there was nothing anyone could do about it. Also I didn't understand why The Rock had a skateboard he'd carrier around but never use. I would want anyone to see this movie that can get the chance. Michael Bay did a great job making this movie.

What would I change? (Spoiler)
Although this movie was "based" on true facts and there shouldn't be anything to change. I think if I could, I'd want them to maybe change the outcome of the trial. I kinda felt said that Daniel had to have the death sentence. Realistically he didn't really mean for the guy to die, it was kinda a accident.

Let me know if your living the American Dream below.