Blumhouse Television and Amazon Studios' 'Welcome to the Blumhouse' 2021 Lineup 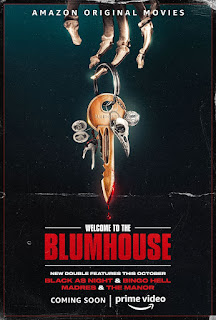 Amazon Prime Video is excited to announce this year's installment of "Welcome To The Blumhouse," featuring an all new set of unique, unsettling thrillers developed with an eye towards original, diverse storytelling. Produced by Blumhouse Television and Amazon Studios, BINGO HELL, BLACK AS NIGHT, MADRES and THE MANOR premiere worldwide this October exclusively on Prime Video.

The “Welcome to the Blumhouse” slate once again showcases both well-established and breakout actors collaborating with emerging, predominantly female, directors.

BINGO HELL - A feisty senior citizen fights to protect her beloved neighborhood from an evil force that’s taken over the local bingo hall and is killing the residents in gruesome ways.

BLACK AS NIGHT - A resourceful teenage girl driven by revenge, alongside her trusted friends, spends her summer battling vampires terrorizing her city of New Orleans.

THE MANOR - After suffering a mild stroke, Judith Albright reluctantly moves into a historic nursing home where she becomes convinced a supernatural force is killing the residents.

BINGO HELL and BLACK AS NIGHT premiere on October 1, followed by MADRES and THE MANOR on October 8.