'Army of the Dead' is fun, action-packed, and slow-moving dialogue 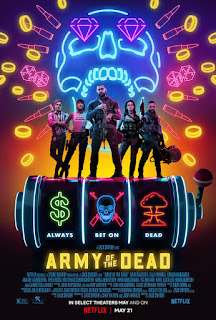 - 'Army of the Dead' Review ARMY OF THE DEAD takes place following a zombie outbreak that has left Las Vegas in ruins and walled off from the rest of the world. When Scott Ward (Dave Bautista), a displaced Vegas local, former zombie war hero who’s now flipping burgers on the outskirts of the town he now calls home, is approached by casino boss Bly Tanaka (Hiroyuki Sanada), it’s with the ultimate proposition: Break into the zombie-infested quarantine zone to retrieve $200 million sitting in a vault beneath the strip before the city is nuked by the government in 32 hours. Driven by the hope that the payoff could help pave the way to a reconciliation with his estran

'Army of the Dead' is available on Netflix on Friday May 21st, 2021. 'Army of the Dead' is Zack Snyder’s newest film, and it’s a Netflix original zombie outbreak in Las Vegas! I will be the first to admit that I haven’t been the biggest fan of Snyder’s recent work, but I really liked the trailers for this one and word of mouth has been positive, so I was really excited for it. Safe to say, Army of the Dead disappointed the hell out of me.

Is this movie entertaining? It sure is. Tons of action, blood, and guns. Is it funny? It has some good laughs in it, for sure. But do many of the decisions from the filmmakers leave you dumbfounded that they ended up in front of a camera? Most definitely. And with a cast of relatively unknowns, being led by a mildly talented Dave Bautista, the performances were as expected.

Look, I’m not here to trash a movie all day long, I just really expected more from a veteran filmmaker helming an original vision. This movie is 45 minutes too long and has plenty of 2-minute storylines to cut out to get there. It also has a ton of slow motion, Snyder’s favorite, that gets frustrating when a time bomb is ticking down and you’re watching 30-seconds of slow motion laughing.

If I had to narrow down one big flaw for this movie, it’s the lack of urgency. Without spoilers, all I’ll say is circumstances change throughout this movie where urgency is key, and the characters know this and make the audience well aware, but their actions speak otherwise. It was an interesting feeling. I was told its time to grab my seat and hold on, they have to move quickly, and nothing changed in their behavior.

Overall, I really hoped for more from Army of the Dead. I think Snyder is the perfect director to take on a short, fun, action-packed zombie flick. But he got in his own way once again and wrote in areas of unearned emotion, and slow-moving dialogue that bogs this one down and massively elongates the runtime. I was entertained, but I’ll never watch it again, and I wish that wasn’t the case.