'Boogie' brings the heart, but not the story 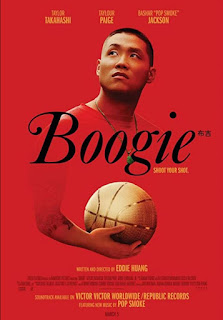 - Read Billy's review of 'Boogie' The film follows a young Chinese-American basketball phenom who struggles to balance the expectations of his immigrant family with his own dreams of becoming a player for the NBA.

'Boogie' is a "coming-of-age" story of Alfred "Boogie" Chin, a basketball phenom living in Queens, New York, who dreams of one day playing in the NBA. While his parents pressure him to focus on earning a scholarship to an elite college, Boogie must find a way to navigate a new girlfriend, high school, on-court rivals and the burden of expectation.

The idea of a "coming-of-age" story is there, but it's not quite the one we want to watch. It doesn't give you that feeling you get when you actually watch a "coming-of-age" film. It could be fault on the acting, as it seems to not hit home with the audience. The acting just doesn't make you feel connected to the character or the ark of the story.

Eddie Huang, who directed this film, can be summed up with his TV series 'Fresh Off the Boat.' While the TV series is a hit, and makes people laugh and remember a simplier time, the new film 'Boogie' does not have this same feeling. Huang maybe should have relied on adding more comedy to the story, he may have wanted to make the movie feel real, and not as joke bites type of funny, but he needs to add that to keep the audience invested.

While this movie does show light on Asian American athletes, it just doesn't bring the story and willingness to want to watch, to make this a perfect film to watch in a theater.

If you get a chance to watch this film, you may enjoy it. It does have a lot of heart, and it does make you want to watch to see what happens with the character by the end of the film. This one maybe best viewd at home.