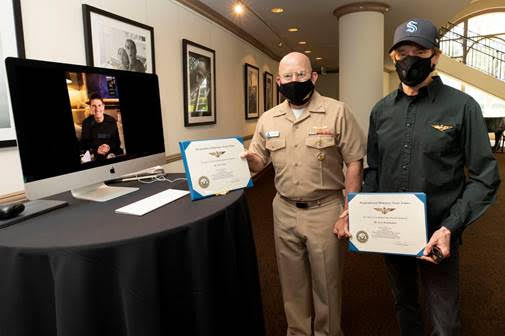 The designations were presented by the Commander of Naval Air Forces, Vice Adm. DeWolfe Miller III, prior to a screening of Top Gun: Maverick, which is scheduled to premiere on July 2, 2021. As honorary Naval Aviators, Bruckheimer and Cruise are authorized to wear the “wings of gold” of a U.S. naval aviator and are entitled to all honors, courtesies and privileges afforded to Naval Aviators.

The citation for the award stated “In the history of motion pictures, there is not a more iconic aviation movie than the 1986 Paramount Pictures film Top Gun. Its characters, dialogue and imagery are ingrained in the minds of an entire generation of Americans. The movie captured the hearts of millions, making a profound positive impact on recruiting for Naval Aviation,” and “significantly promoted and supported Naval Aviation and put aircraft carriers and naval aircraft into popular culture.” The citation went on to say that Cruise and Bruckheimer made great efforts to “ensure the Top Gun franchise is as authentic as possible, staying true to the unparalleled tactical excellence of the Navy Fighter Weapons School, the ethos of Naval Aviation, and the fighting spirit of the men and women of the world’s greatest Navy.”

The distinction of honorary Naval Aviator has not been bestowed in more than two years. Previous designees include Bob Hope in 1986 for his contributions to the morale of the Naval Aviation community, Jim Neighbors in 2010 for his support of the Pacific Aviation Museum and contributions to the morale of service members in his on-screen role as U.S. Marine, Pvt. Gomer Pyle, and Susan Ford Bales in 2016 for her role as ship's sponsor for aircraft carrier USS Gerald R. Ford (CVN 78).

In Top Gun: Maverick, Cruise is reprising the iconic role of Navy pilot Pete “Maverick” Mitchell. Bruckheimer produced both films, with Top Gun grossing more than $350 million at the box office worldwide and influencing an entire generation of Naval Aviators.