'Inmate #1: The Rise of Danny Trejo' is uplifting & worth the watch! 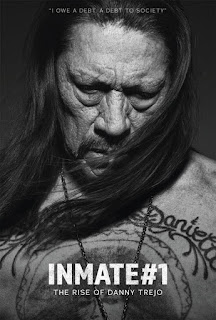 - Read Lauren's review of 'Inmate #1: The Rise of Danny Trejo.' Having spent much of his early life in prison, actor Danny Trejo discusses his career and how he has overcome a life of crime and addiction.

If you’re a millennial like me, anytime you hear the name Danny Trejo, you think of Spy Kids. He was their funny, slightly scary Uncle Machete – and was arguably the best part of the movie. What I didn’t know then was who Danny Trejo really was. Inmate #1: The Rise of Danny Trejo explores just that – the rise of Danny Trejo from a troubled teen ending up in prison to an unlikely Hollywood hero. This movie was a warm, uplifting documentary that gave me a bit of joy among so much turmoil going on today.

Inmate #1: The Rise of Danny Trejo can be broken into two parts: the first half of Danny’s tumultuous life and the second half Danny’s redemption and journey into Hollywood. Danny Trejo grew up with a tumultuous homelife, finding a mentor in his uncle – a notorious thug in the neighborhood. Seeing what he perceived as an easy lifestyle full of money and women and little care for anything, this is the lifestyle he wants. He’s introduced to heroin at age 14, and soon after joins his uncle in armed robbery. What follows is an arrest and sentence to San Quentin Prison. While in prison, he realizes the choices he has – continue down this path and continue to lose years of his life or make a positive change.

The second half follows Danny as he gets out of prison in his mid-20s newly sober and immediately chooses the selfless act of speaking out and counseling others with similar stories to his. As a sought-out speaker, he’s soon “discovered” by Hollywood when he gets the opportunity to coach a young Eric Roberts to box on the set of Runaway Train. What follows is a powerful, uplifting story of one of Hollywood’s tough guys, complete with commentary and support from both his childhood friends, family, and the celebrity friends he’s made along the way.

The best part of this documentary is Trejo himself. He has an energy that you can’t fake. His outlook on life and the positive things he’s done is so heartwarming. He laughs through his Hollywood career, highlighting some of the outrageous ways he’s died in movies, and shows gratitude for the progression he found. What started as simple “Inmate #1” roles turned into his most famous role as Machete – a Mexican, knife-wielding hero. And making it in Hollywood is hardly his greatest achievement. He continues to visit prisons, counseling convicts on turning around their lives, advocating for his neighborhood, and staying true to his routes all these years later. This documentary was an unexpectedly inspiring story of someone who earned his place in Hollywood and beyond. Worth the watch!