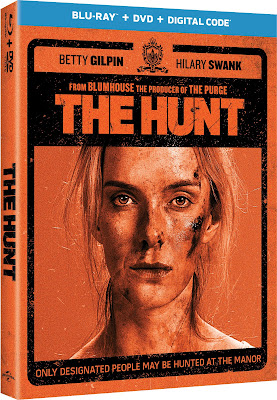 In this subversive satire, a group of elites gather for the very first time at a remote Manor House to hunt ordinary Americans for sport. But the elites' master plan is about to be derailed because one of The Hunted, Crystal (Betty Gilpin, GLOW), knows The Hunters' game better than they do. She turns the tables on the killers, picking them off one by one as she makes her way toward the mysterious woman (two-time Oscar® winner* Hilary Swank) at the center of it all. THE HUNT BONUS FEATURES on BLU-RAYTM, DVD AND DIGITAL:
CRAFTING THE HUNT - Filmmakers and cast discuss how costumes and props were used to highlight the political commentary of this slaughterous thriller.
DEATH SCENE BREAKDOWNS – THE HUNT’s talented special effects and make-up teams give you an inside look on how they carried out some of the goriest death sequences.
ATHENA VS CRYSTAL: HUNTER OR HUNTED? – Go behind the scenes to check out the intense training and choreography actresses Betty Gilpin and Hilary Swank had to master in order to execute this epic fight scene.