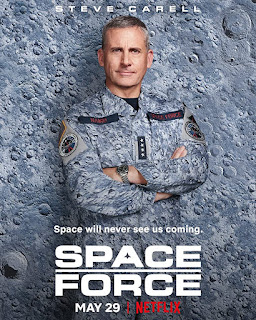 - Read Josh's review of Space Force. A decorated pilot with dreams of running the Air Force, four-star general Mark R. Naird (Steve Carell) is thrown for a loop when he finds himself tapped to lead the newly formed sixth branch of the US Armed Forces: Space Force. Skeptical but dedicated, Mark uproots his family and moves to a remote base in Colorado where he and a colorful team of scientists and “Spacemen” are tasked by the White House with getting American boots on the moon (again) in a hurry and achieving total space dominance. From co-creators Carell and Greg Daniels (The Office), SPACE FORCE is a new kind of workplace comedy, where the stakes are sky high and the ambitions even higher. John Malkovich, Diana Silvers, Tawny Newsome, Ben Schwartz also star, alongside co-stars Lisa Kudrow, Jimmy O. Yang, Noah Emmerich, Alex Sparrow and Don Lake. Howard Klein/3Arts (The Office) serves as executive producer, with Daniels as showrunner.

I’ve always enjoyed Sci-Fi films and shows about going into space and going places no man has ever gone before. It’s rare to find shows that are able to tie in sci-fi with real world events. It’s even more rare to stumble across a Sci-Fi Comedy like Space Force. In retrospect, the direction of the show did seem kind of forced (no pun intended), but I’m a fan of this type of comedy. I will give the show the benefit of the doubt in that this is very much the first season. One of those where people could be saying “once you get past the first season it becomes good”. But there will be some need for structural change for a second season.

The writing and directing of this show was completely unpredictable. The acting in this show was also hit or miss as well. Steve Carell, as General Mike Naird, was simply an older, still bumbling, Michael Scott (The Office). I was waiting for Kevin to walk around the corner with the big pot of chili at any moment. John Malkovich does an excellent job in this show as Naird’s counterpart. He’s able to easily steal a couple laughs at Naird’s expense while maintaining his professional scientific composure. My favorite character is Ben Schwartz who acts as the Naird’s right-hand man helping him construct Tweets and quotes to help him appear relevant to the media and public. The only other notable performance in my opinion is that of Jimmy Yang, who plays a know-it-all astrobotanist who also steals the spotlight in many scenes when given a chance. Diana Silvers was not a standout for me as she ended up just being the boring, average teenager. I wanted there to be more with her, and maybe we’ll see that with future seasons.

Overall, I enjoyed the show. If you’re watching for a storyline, expect a very slow show. I’m looking forward to a second season and I believe there’s a lot of unanswered questions and much more they can do with the premise. If you can appreciate a few funny one-liners and quick gut punches, you will probably enjoy Space Force. “I only wish that my parents could have been here to see this…but they were unable to get flights from New Jersey in time.” – General Naird