'The Way Back' Keeps you Cheering! 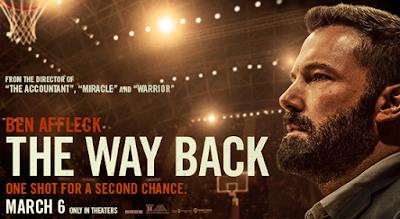 - Read Ashley's review of The Way Back. Jack Cunningham (Ben Affleck) once had a life filled with promise. In high school, he was a basketball phenom with a full university scholarship, when suddenly, for reasons unknown, he walked away from the game, forfeiting his future. Now years later, Jack is spiraling down, triggered by an unspeakable loss, and drowning in the alcoholism that cost him his marriage and any hope for a better life. When he is asked to coach the basketball team at his alma mater, which has fallen far since his glory days, he reluctantly accepts, surprising no one more than himself. As the boys start to come together as a team and win, Jack may have finally found a reason to confront the demons that have derailed him. But will it be enough to fill the void, heal the deep wounds of his past, and set him on the road to redemption? 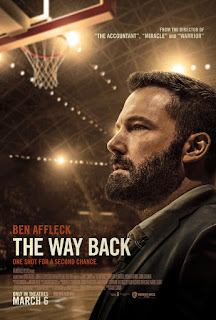 The Way Back stars Ben Affleck as Jack Cunningham, a man struggling to piece his life together. As a former high school basketball star, he is approached by a former teacher to return to coach the team. Cunningham must decide if he wants to stray away from his depression or find his way back to happiness. Can this emotionally charged film break away from its underdog cliche?

From the beginning, the Way Back tells Jack Cunningham’s story with eye opening scenes of how alcoholism and depression can affect someone. Cunningham spends his days alone and it is easy to get viewers to feel compassion for his daily struggles. The joys and up’s and down’s as he starts coaching the basketball team add to that compassion because of how real it felt. The players add to this because of how they interact with their foul mouthed coach so you cannot help but root for them during each game.

This film shows how hard rock bottom can hit. It does not always mean the person is stuck in sadness. Many times the humor serves as a reminder of how life can be so waving depending on those around you. Producer Gavin O’Connor along with Affleck is enough to convince viewers of this story despite its cliche tendencies. After five minutes of watching the Way Back, it does get overwhelmingly predictable but somehow I found myself still rooting for Bishop Hayes.

Even though it falls into the cliche underdog film category, the Way Back stands out with exceptional performances by its cast. With convincing acting this movie goes above expectation and provides a heartfelt, inspirational plot.