By: Billy Joynt | February 18th, 2020 Broadway In Detroit is proud to present the Detroit engagement of the Tony Award®-nominated Broadway revival of Fiddler on the Roof at the Fisher Theatre from March 10 – 15, 2020.

Tickets start at $45 and can now be purchased online at broadwayindetroit.com or ticketmaster.com. Tickets may also be purchased by phone by calling 800-982-2787, and at the Fisher Theatre box office. 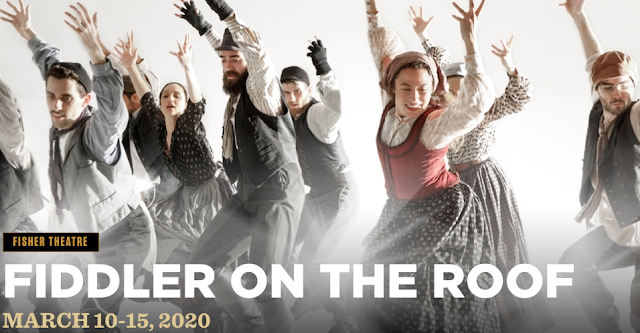 A beloved theatrical classic from Tony Award-winner Joseph Stein, and Pulitzer Prize-winners Jerry Bock and Sheldon Harnick, Fiddler on the Roof is directed by Tony Award-winner Bartlett Sher (South Pacific, The King and I); choreographed by the acclaimed Israeli choreographer Hofesh Shechter; inspired by the original choreography of Jerome Robbins; and has musical direction by Ted Sperling.

Fiddler on the Roof is the heartwarming story of fathers and daughters, husbands and wives, and life, love and laughter. This classic musical is rich with Broadway hits, including “To Life (L’Chaim!),” “If I Were A Rich Man,” "Sunrise Sunset,” "Matchmaker, Matchmaker,” and “Tradition.”

Following a critically-acclaimed first year on tour, Israeli theatre, film and TV star, Yehezkel Lazarov, will continue his celebrated performance as Tevye in Year 2 of the Fiddler on the Roof North American Tour.

The original Broadway production of Fiddler on the Roof, which opened in 1964, was the first musical in history to surpass 3,000 performances. The show won the 1965 Tony Award for Best Musical in addition to eight other Tony Awards that year. This acclaimed revival proudly introduces a new generation to the iconic musical adored across the globe.

The world premiere of Fiddler on the Roof, before it went to Broadway, was at Detroit’s Fisher Theatre in 1963 starring Zero Mostel.

Tickets for Fiddler on the Roof start at $45 (includes facility and parking fees) and are now on sale. Tickets can be purchased online at broadwayindetroit.com or ticketmaster.com, and by phone at 800-982-2787. A limited number of premium seats will be available through Ticketmaster and at the Fisher Theatre box office. For group sales (10 or more) please call 313-871-1132 or email groups@broadwayindetroit.com. Tickets for the open captioned and audio described performance may be purchased in person at the Fisher Theatre box office or by phone at 313-872-1000, ext. 0. Performance schedule, prices and cast are subject to change without notice.