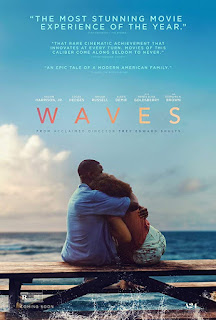 Read Ashley's review of Waves. Traces the journey of a suburban family - led by a well-intentioned but domineering father - as they navigate love, forgiveness, and coming together in the aftermath of a loss.

Waves follows a South Florida family that goes through a series of emotional events. With the ideal family on the exterior, having a closer look at this fictional family shows that not everything is as it seems. Can this emotional film live up to its expectation?

Waves is raw emotion of all types. The characters feel like they are real with how well portrayed the family and those surrounding them are. It feels almost like watching a documentary at how well captured the unpredictability of life is depicted with the actors.

It does get cliche toward the second act yet which dulls the intensity of the first portion. Although they differ in intensity, the power they hold in their own ways still shows. The connection and how small decisions can affect more than only the individual making them is enough to carry memorability well after Waves is over.

The complexity of Waves as a family drama is enough to showcase the difficulties that emotions bring whether good or bad. The end result is a film that uses great performances to tell an emotional story.