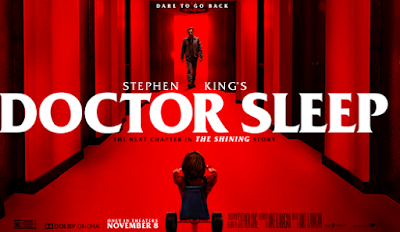 Read Ashley's review of Doctor Sleep. “Stephen King’s Doctor Sleep” continues the story of Danny Torrance, 40 years after his terrifying stay at the Overlook Hotel in The Shining. Ewan McGregor, Rebecca Ferguson and newcomer Kyliegh Curran star in the supernatural thriller, directed by Mike Flanagan, from his own screenplay based upon the novel by Stephen King.

Still irrevocably scarred by the trauma he endured as a child at the Overlook, Dan Torrance has fought to find some semblance of peace. But that peace is shattered when he encounters Abra, a courageous teenager with her own powerful extrasensory gift, known as the “shine.” Instinctively recognizing that Dan shares her power, Abra has sought him out, desperate for his help against the merciless Rose the Hat and her followers, The True Knot, who feed off the shine of innocents in their quest for immortality. Forming an unlikely alliance, Dan and Abra engage in a brutal life-or-death battle with Rose. Abra’s innocence and fearless embrace of her shine compel Dan to call upon his own powers as never before—at once facing his fears and reawakening the ghosts of the past. 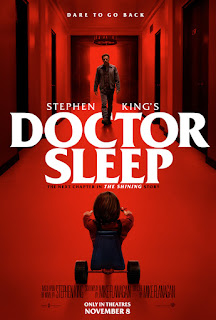 Doctor Sleep is in theaters on November 8th, 2019.

Doctor Sleep is the sequel to the Shining and continues Danny Torrance’s story. Since his time at the Overlook Hotel, Torrance deals with his trauma and meets a powerful, young girl who also has the “shining”. They encounter another powerful group who will stop at nothing to stop them from shining. Can this sequel give the same horror feelings of its predecessor?

The pressure was on for director Mike Flanagan to continue Stephen King’s chilling horror after the classic Stanley Kubrick produced. He succeeds with a cast that picks up the story with seamless effort. Ewan McGregor does a great job at portraying Danny Torrance as a tormented adult who finds a rocky relationship between peace and his past. The new characters introduced in Doctor Sleep also do a good job with their roles which toy which the same fine line of sanity as the first.

With so much time that has passed between the Shining and this sequel, I highly recommend you watch for a refresher or for the first time. The connections are covered throughout this film and answer a lot questions from the first. There are some scenes that drag out and a bit too much CGI was used which makes it lose a good portion of its fear factor. Despite this, it is still enough to instill a repeat fear from a familiar story.

Doctor Sleep is the type of sequel you did not know you wanted until you see how well executed it is. The continuation of the story is enough to grasp viewers all over again while still remaining fresh.