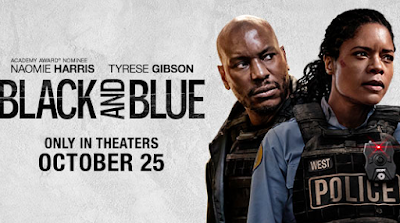 Read Billy's review of Black and Blue. Black and Blue is a fast-paced action thriller about a rookie cop (Academy Award® nominee Naomie Harris) who inadvertently captures the murder of a young drug dealer on her body cam. After realizing that the murder was committed by corrupt cops, she teams up with the one person from her community who is willing to help her (Tyrese Gibson) as she tries to escape both the criminals out for revenge and the police who are desperate to destroy the incriminating footage. 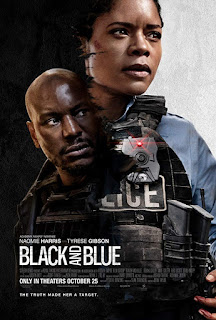 When you first watch the trailer for Black and Blue, you’ll think that it looks action packed, and that you’ll be ready for an intense ride. Well Black and Blue falls into the hole where the trailer shows you the most intense scenes. While it’s still exciting to see it in the theater, it’s not the same level you want it to be at.

Make sure you get a big bucket of popcorn for this movie. It needs it to help it move from the slow part to the next slow part.