'It Chapter Two' is an Incredibly Unwieldy Film - Joshua's Review

Read Joshua's review of It Chapter Two. Evil resurfaces in Derry as director Andy Muschietti reunites the Losers Club—young and adult—in a return to where it all began with “IT CHAPTER TWO.” Because every 27 years evil revisits the town of Derry, Maine, “IT CHAPTER TWO” brings the characters—who’ve long since gone their separate ways—back together as adults, nearly three decades after the events of the first film. James McAvoy (“Split,” upcoming “Glass”) stars as Bill, Oscar nominee Jessica Chastain (“Zero Dark Thirty,” “Mama”) as Beverly, Bill Hader (HBO’s “Barry,” “The Skeleton Twins”) as Richie, Isaiah Mustafa (TV’s “Shadowhunters: The Mortal Instruments”) as Mike, Jay Ryan (TV’s “Mary Kills People”) as Ben, James Ransone (HBO’s “The Wire”) as Eddie, and Bill Skarsgård returning in the seminal role of Pennywise. Andy Bean (“Allegiant,” Starz’ “Power”) plays Stanley, and reprising their roles as the original members of the Losers Club are Jaeden Martell as Bill, Wyatt Oleff as Stanley, Sophia Lillis as Beverly, Finn Wolfhard as Richie, Jeremy Ray Taylor as Ben, Chosen Jacobs as Mike, and Jack Dylan Grazer as Eddie. 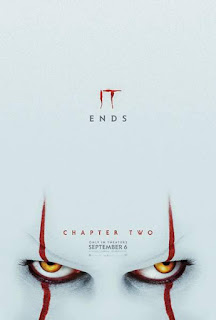 Coming in at 2 hours and 45 minutes, IT Chapter 2 brought the terrifying story of Pennywise the Clown to an end. After 27 years, the original crew of "losers" return to their hometown of Derry to finish what was started. The movie tactfully casts adult versions of the younger cast from the first movie. The actors are mostly fine, save for the actor playing Ben as an adult who seemed straight out of a TV movie to me. Hader is, as everyone says, great, especially in a role that could become grating because he’s the source of endless wise cracks.

The film is oddly structured — it mirrors the structure of the first one somewhat (we meet each character, there is some nostalgic friendship stuff, we watch them all meet IT in various ways, they fight IT in the sewer), but it’s that much longer because now it’s both the adults and the kids that we see meeting IT in various scenes that often feel disconnected from each other, and none of that even includes things like bully from the first movie coming back and also terrorizing them and the silly stuff with the Native American rituals and talismans they had to collect and all of that.

I'd say Chapter 2 is an incredibly unwieldy film with a lot of good elements tossed into the mix and a strong close. Length is strange, in that it almost needs to be longer to feel shorter? I may be wrong but it feels like so much was cut that the pace is choppy and subsequently it feels a bit long.