'Ready or Not' is a Fun Thriller - Ashley's Review 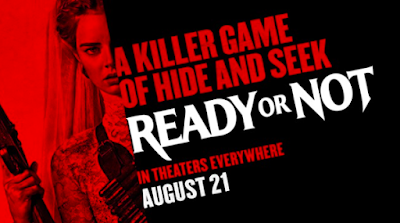 Read Ashley's review of Ready or Not. Ready or Not follows a young bride (Samara Weaving) as she joins her new husband’s (Mark O’Brien) rich, eccentric family (Adam Brody, Henry Czerny, Andie MacDowell) in a time-honored tradition that turns into a lethal game with everyone fighting for their survival. 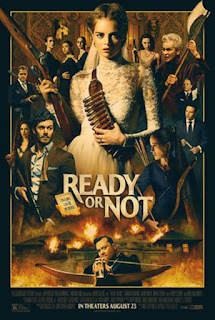 Ready or Not is the mystery/thriller about a woman named Grace, who gets married to the man of her dreams. They wed at his wealthy family’s estate and she could not be more happy. That night she finds out she has to play a lethal game of hide and seek to become officially a part of the family. Can this thriller based on an innocent childhood game be enough to scare?

From first glance it is almost impossible to figure out the tone of this film. It starts off light and hearty, switches to being more sinister, mixed in some comedy then flips back to a variation of the above. I think this constant switch in tone helps the film related to its title of Ready or Not. A game of hide and seek can be playful at first then turns into a more intense game the closer the seeker is to finding the game’s participants. Having that same tone is beneficial to this thriller because the audience does not know what to expect.

Ready or Not is a fun thriller too because it is entertaining to watch Samara Weaving as Grace try to survive the night. She is the underdog in the situation because her husband’s entire family is looking for her and it is easy to start rooting for her during her wedding night. Ready or Not plays well on how mysterious marriage and dysfunctional family can be in the form of a thriller that is full of surprises.

You will want to RSVP for the intense wedding that Ready or Not is. It is a film that is a good mix of a entertaining thriller that will probably make you want to watch the game again and again.