'The Art of Self-Defense' is Plain Weird - Kelsi's Review 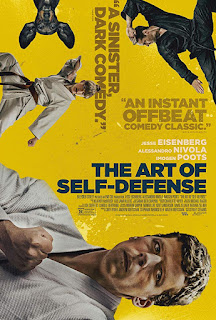 Read Kelsi's review of The Art of Self-Defense . A man is attacked at random on the street. He enlists at a local dojo, led by a charismatic and mysterious sensei, in an effort to learn how to defend himself.


There’s a lot of words I could choose from when trying to describe the film, The Art of Self- Defense. However, I think I will keep it simple and say that this movie was just plain weird. The film was definitely far from what I was expecting it to be. Although it is labeled a comedy, you’re too confused to laugh. An honestly, I thought this movie was pretty sad. There was more gore than anything else, but I guess that’s the point of dark humor.

A young man, once sweet and innocent, is brutally attacked late one night. This attack leaves him traumatized and he decides he will stop at nothing to become what he fears. On an adventure that he thinks will “better him,” he’s forced into becoming one of the bad guys. Watch in suspense as there are low blows, high blows, and punches thrown with feet. You’re bound to takeaway a new karate technique once the Sensei is through.

I must admit, I’ve seen just about every Jesse Eisenberg movie and this is definitely my least favorite. When asked whether The Art of Self-Defense was good or not, I was at a loss of words. It is one of those movies that truly is in the eye of the beholder. I can see some people actually liking it even though I may not be a fan. I will say, the confusion you’re constantly left with during the film does keep you watching!