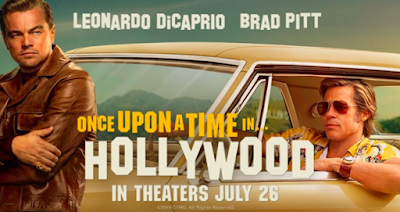 Read Nicolette's Review of Once Upon A Time In Hollywood. Quentin Tarantino’s Once Upon a Time in... Hollywood visits 1969 Los Angeles, where everything is changing, as TV star Rick Dalton (Leonardo DiCaprio) and his longtime stunt double Cliff Booth (Brad Pitt) make their way around an industry they hardly recognize anymore. The ninth film from the writer-director features a large ensemble cast and multiple storylines in a tribute to the final moments of Hollywood’s golden age. 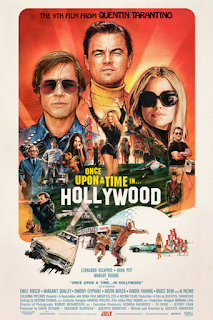 Once Upon A Time in Hollywood comes out this weekend! It was a very anticipated movie for many like it was for me. For one, it has been too long for a Tarantino movie to release. And there are some very big names in this movie! I was so excited to check out this movie and I walked out very pleased.

This movie is the ninth movie written and directed by Quentin Tarantino. It takes place in Los Angeles (Hollywood) in the 1960’s. It’s about an aging television actor, Rick Dalton (Leonardo DiCaprio) and his stunt double Cliff Booth (Brad Pitt) trying to re-invent themselves. It also follows along Sharon Tate (Margot Robbie) as she is beginning her career. Although the trailers make it seem the movie is focused on Charles Manson and his followers, it is not.

I will be very brief in this review, I don’t want to give much away. This movie is a slow burner, very slow, especially the second act. I did find myself a little bored at times. It’s a very laid back movie, very tame with little action. There is of course the touch of brutal violence we all love and enjoy in Tarantino movies. The Sharon Tate plot I feel was underused. We didn’t really see her do much, which kind of bums me out because I’m a huge fan of Margot and I would have loved to see her do more in the film.

The performances were great by everyone involved. Leonardo and Brad are real movie stars. I really enjoyed both of them and they play so well off each other. It’s definitely real acting from real actors, it was very satisfying. It was also surprisingly funny, Tarantino’s funniest! The visuals were beautiful, Hollywood looks so golden. The music in the movie was fantastic as well. I think the last 15 minutes of the movie is what sold me. It was a great final scene, one of my favorites!

Stay during the credits! There are some fun moments during them!