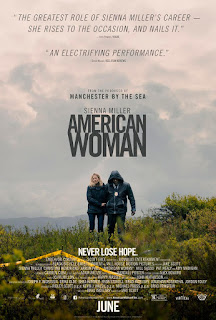 Read Kelsi's review of American Woman. Set in rural Pennsylvania, Deb Callahan’s (Sienna Miller) life is changed forever when her teenage daughter mysteriously disappears. Deb is left to raise her young grandson and navigates the trials and tribulations of subsequent years, until a long-awaited discovery of the truth is revealed.


American Woman is about the tragic story of a mom who loses her daughter and ends up raising her grandson. This film and the cast were absolutely amazing. Sienna Miller, who plays Deb, is left in an unimaginable situation when her daughter Bridget comes up missing. Bridget leaves behind an infant, Tyler, who is now left without a mother or father in his life. We watch as Deb struggles with self-love, healing, and raising another child. Unable to provide for herself and her grandson on her own, she goes through many different relationships throughout the 11years that pass by in the film.

While watching this movie, I realized just how little patience I have. I kept asking myself “WHAT HAPPENED TO THE DAUGHTER? ARE THEY NEVER GOING TO TELL US?” But, don’t worry, because they will get to that explanation…eventually…

This film is sure to move you with its raw and unfiltered reality. I enjoyed watching it, despite my lack of patience in wanting to know what happened to Bridget. Each cast member plays their role respectively. Although there are some dry and confusing parts throughout the film, the story as a whole is impactful.