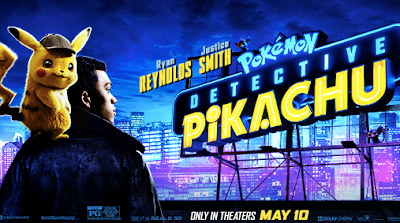 Read Ashley's review of Pokémon: Detective Pikachu. Ryan Reynolds stars in the first-ever live-action Pokémon adventure as Pikachu, the iconic face of the global Pokémon phenomenon—one of the world’s most popular, multi-generation entertainment properties and the most successful media franchise of all time. The story begins when ace detective Harry Goodman goes mysteriously missing, prompting his 21-year-old son Tim (Justice Smith) to find out what happened. Aiding in the investigation is Harry’s former Pokémon partner, Detective Pikachu (Ryan Reynolds): a hilariously wise-cracking, adorable super-sleuth who is a puzzlement even to himself. Finding that they are uniquely equipped to work together, as Tim is the only human who can talk with Pikachu, they join forces on a thrilling adventure to unravel the tangled mystery. Chasing clues together through the neon-lit streets of Ryme City—a sprawling, modern metropolis where humans and Pokémon live side by side in a hyper-realistic live-action world—they encounter a diverse cast of Pokémon characters and uncover a shocking plot that could destroy this peaceful co-existence and threaten the whole Pokémon universe. 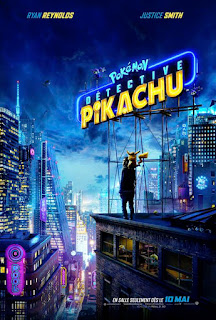 Pokémon: Detective Pikachu is in theaters on May 10th, 2019.

Justice Smith stars as Tim Goodman, son of Harry, a well known detective who is presumed dead after an accident. Now Tim has to solve the mystery of what happened to his father. The movie takes place in Ryme Town, a city where Pokémon and humans live in in harmony. There are no poke balls or battles, it’s a peaceful city where everyone coexists. The city looks like something straight out of the comics mixed with a futuristic Tokyo!

Tim comes across Pikachu (voiced by Ryan Reynolds), the Pokémon partner of his father. Pikachu confides in Tim that all isn’t what it seems when it comes to his fathers disappearance. Together they team up to solve the mystery and get into plenty of mischief along the way.

I’ve been watching Pokémon since it first came out, I remember being in elementary school, collecting the cards and the toys. I was in middle school when the Pokémon movie came out, when we were first introduced to Mew - I went by myself and didn’t care what anyone thought. I still love it and play Pokémon go, I even watched a Pokémon movie before going to the screening just to get me hyped! That being said I come from having knowledge and love for this world and all of the pocket monsters.

At the first sight of Pikachu, I squealed with excitement - he was perfectly executed and just what I imagined a real like Pikachu to look like. The CGI for this movie was incredible. The furry Pokémon looked real and the Squirtles and Bulbasaurs had texture that looked like an amphibious creature. There was a brief showing of Haunter and it was SO awesome (shout out to ghost type)!!! I just wanted to see ALL the Pokémon. It felt like all my childhood dreams were coming true, they looked so real, it’s hard to believe they weren’t. Theres a lot of humor and “fan” jokes that “poke” fun a little bit. The ending is wild but it’s also very reminiscent of how all Pokémon movies end, they go out with a bang!

That being said I’m not sure how someone who’s not familiar with Pokémon would like this movie. It’s funny and entertaining but if it’s not your thing don’t watch it - it’s not for you. This is also voiced by Ryan Reynolds...it’s NOT Deadpool! This is a PG rated movie and while there is some adult humor - it’s not an R rated superhero movie. So don’t go into this thinking just because Ryan is in it that it follows his usual humor, it’s there in a mild form and you can tell the jokes he came up with but it’s not even close to Deadpool.

If you love Pokémon, or if your kids love Pokémon go watch this movie. It blew away my expectations and I can’t wait for the sequel. The only thing missing from this movie was my boy Ash Ketchum, his time is not done and he has a lot left of his story! Fingers crossed he makes an appearance in the next one.