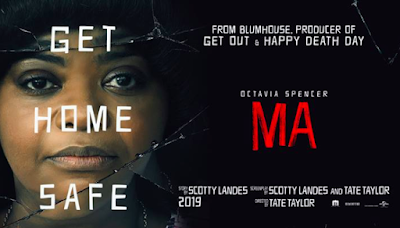 Read Ashley's review of Ma. Everybody’s welcome at Ma’s. But good luck getting home safe.
Oscar® winner Octavia Spencer stars as Sue Ann, a loner who keeps to herself in her quiet Ohio town. One day, she is asked by Maggie, a new teenager in town (Diana Silvers, Glass), to buy some booze for her and her friends, and Sue Ann sees the chance to make some unsuspecting, if younger, friends of her own.
She offers the kids the chance to avoid drinking and driving by hanging out in the basement of her home. But there are some house rules: One of the kids has to stay sober. Don’t curse. Never go upstairs. And call her “Ma.”
But as Ma’s hospitality starts to curdle into obsession, what began as a teenage dream turns into a terrorizing nightmare, and Ma’s place goes from the best place in town to the worst place on earth. 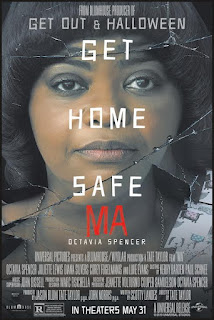 Ma is a thriller film focused on a group of high school friends who ask a outwardly harmless woman, Sue Ann (Octavia Spencer) to buy them alcohol. Sue Ann extends her invitation to buy them booze to opening up her basement for them to have a safe place to party. She quickly turns from being the life of the party to having an obsession with the group and unleashing terror. Can this seemingly cliche high school focused film turn into something fearful?

s Knowing how great of an actress Octavia Spencer is, I had little doubt that she would not do this role justice. She exceeded that and done by transforming Sue Ann into Ma. What seemed to be a teenagers’ dream of being able to party when they want and having full access to alcohol quickly turned into a nightmare with her unpredictability. Watching her emotions turn so much and having the edge of suspense consistently pushing the plot forward leaves viewers on the edge of the seat waiting to see how it will all play out.

While the movie does have jump scares it more so relies on shock factor which works. Way too many high school focused movies like this use cheap jump scares to reach the audience but this one instead play a game with your mind just as the plot plays its game. It’s loony and an entertaining type of scare that probably will not have you screaming but had the theaters very vocal with shock and squirming in their seats.

The storyline does have several holes but what horror movie does not? They do their best to fill them in and leave others wide open. The slow build up of suspense does however do a good job at making you forget where the plot does falter.

Octavia Spencer appeared to have fun with this role and it worked. It makes the movie drip with an ominous yet amusing tone like something I have not seen in a while but I would enjoy watching again.