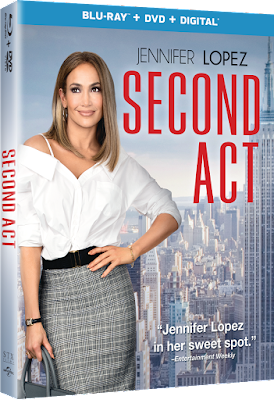 Jennifer Lopez (Maid in Manhattan, “Shades of Blue”) returns to the big screen and proves it’s never too late to pursue your dreams in the hilarious and relatable romantic comedy, Second Act, coming to Digital on March 12, 2019 and on Blu-rayTM Combo Pack, DVD and On Demand on March 26, 2019 from STXfilms and Universal Pictures Home Entertainment.

Maya (Lopez) is a 40-year-old woman struggling with frustrations of not having achieved more in life. As an experienced, quick-witted, perceptive employee, she is passed over for a promotion solely because she doesn’t have a college degree. Until, that is, she gets the chance to prove that street smarts are as valuable as book smarts, and that it is never too late for a Second Act.