Enter to win Sgt. Will Gardner on Bluray! 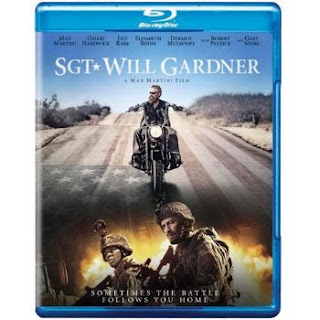 Enter to win Sgt. Will Gardner on Bluray!
SGT. Will Gardner tells the story of Iraq War veteran Will Gardner (Max Martini) who is suffering from a traumatic brain injury (TBI) he sustained with his platoon while in combat. His injuries make it difficult for him to reintegrate into society. After a series of setbacks, he embarks on a spirited motorcycle journey across America with the goal of reuniting with his son. Along his journey, he tries to pick up the pieces of the life he's lost since returning from combat. His PTSD causes frequent flashbacks to the Iraq War which he survives by having frequent conversations with Sam (Omari Hardwick), his best friend and war buddy.

Martini, who also wrote and directed the film hopes this movie serves as a reminder and a call to action. In this spirit, his producing moniker, Mona Vista Productions, will donate a portion of the film’s proceeds to three charities that support veterans suffering from Traumatic Brain Injury (TBI), PTSD and veteran homelessness: Higher Ground, Warriors Heart and the Gary Sinise Foundation.