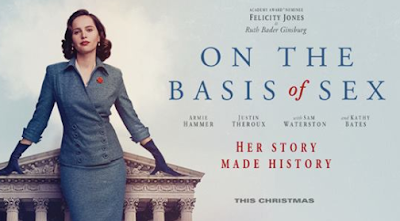 Read Anthony's review of On The Basis of Sex. The film tells an inspiring and spirited true story that follows young lawyer Ruth Bader Ginsburg as she teams with her husband Marty to bring a groundbreaking case before the U.S. Court of Appeals and overturn a century of gender discrimination. The feature will premiere in 2018 in line with Justice Ginsburg’s 25th anniversary on the Supreme Court. 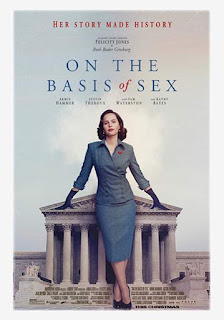 The story of Ruth Bader Ginsburg, her struggles for equal rights and what she had to overcome in order to become a U.S. Supreme Court Justice.

I must say I had some very high hopes for this film and the whole thing just didn’t meet my expectations. So starting with the positive I felt like the costume design was pretty spot on. Everything looked very befitting to the time frame and really helped establish a feel for when everything was going on.

The film had some pretty solid editing as well except for when it really mattered. How they broke up the “chapters”, if you will, of the story really just sucked. It felt choppy and misplaced; however, the lesser important edit points were the redeeming quality of the overall flow of the movie.

To be completely honest the very end was the only super exciting part for me. Which was sad because the whole movie should’ve been superb. They had a great story with some pretty stellar actors. A strong female lead, which was the rock of the relationship which I did enjoy seeing the female take that role of the marriage. But all in all it just wasn’t the emotional power house of a movie that it should have been. In fact probably my biggest issue was that I didn’t care at all. Which in a movie about women's equal rights the emotion evoked from experiencing the movie should be what drives us to continue to seek out and improve on women’s rights. But by the end of the movie I was just glad it was over. This film had the potential to make some big waves, and sadly it was just a splash in the kitty pool.