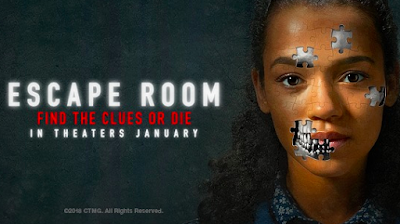 Read Will's review of Escape Room. Escape Room is a psychological thriller about six strangers who find themselves in circumstances beyond their control and must use their wits to find the clues or die. 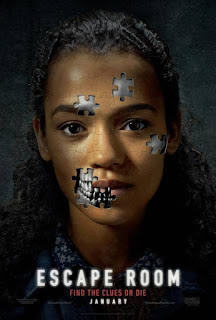 Have you ever been talked into going to one of those escape room parties with a group of friends? What would be the worse thing that could happen to you, embarrassment, frustration, death? Well in the movie, 'Escape Room' it's the latter and your worst nightmare comes to life. So you would know the general conceit of this movie then. Six strangers are sent a puzzle box that invites them to partake in one of these games. Once there, they realize the game has begun and there are real life stakes in this game as in you either win or die.

'Escape Room' is a horror/thriller directed by Adam Robitel and was able to craft a thrilling and terrifying experience. Which is until the movie didn't stick the landing. We open with Zoey (Taylor Russell), a shy, smart college student being told to do something out of her comfort zone and then receives the forementioned puzzle box. Jason (Jay Ellis), a hot-shot stockbroker, and Ben (Logan Miller), a sad grocery clerk are shown trying to open their boxes. Amanda (Deborah Ann Woll), a battle scarred solider, Mike (Tyler Labine) a semi truck driver, and Dany (Nik Dodani), an escape room aficionado, are already waiting for the game to begin. All are expecting a fun and exciting challenge but to their surpise, they realize they are in a death trap.

For most of the runtime, Robitel is able to generate a palpable tension, and creating beautiful atmosphere. Some of the productions designs are outright stunning. You can really get caught up in the characters backstory as they are being presented and care when they have a setback, well most of them. The set pieces are brilliant and the cast has good chemistry, the standouts being Logan Miller and Deborah Ann Woll for bringing a vulnerability to her character. I was on the edge of my seat for the majority of the movie. Until, the last 15 minutes or so when the movie loses its momentum and making silly desicions. It definitely took me out of the movie. Not that the writing was the greatest but the actors were able to elevate the material. I guess you can only do so much with a PG-13 rating.

The ending was totally unneccesary and left a lot more questions than answers. It also has a Final Destination feel to it where it is not as gory but the relationships between the characters are similar. This is still an enjoyable enough movie even with all of the missteps to not disregard it. I could be interested in a sequel that it obvisously is trying to setup.