Andrew Lloyd Webber’s THE PHANTOM OF THE OPERA will run at the Detroit Opera House, January 24 – February 3, 2019!

Cameron Mackintosh’s spectacular new production of Andrew Lloyd Webber’s THE PHANTOM OF THE OPERA will go on sale Sunday, October 14 for the triumphant return engagement at the Detroit Opera House, January 24 – February 3, 2019. With newly reinvented staging and stunning scenic design, this new version of PHANTOM is performed by a cast and orchestra of 52, making this one of the largest productions on tour in North America. 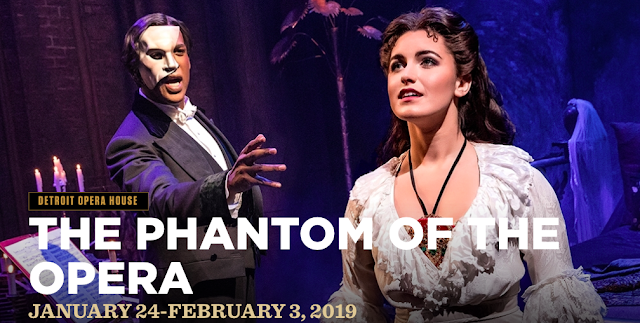 Andrew Lloyd Webber said, “Having received great critical acclaim in the U.K. and North America, I am really pleased that Laurence Connor’s new production of PHANTOM will continue to tour the U.S. playing in tandem with the Broadway production which just celebrated 30 years at the Majestic Theatre.”

Cameron Mackintosh said, “With PHANTOM still the reigning champion as the longest-running production on Broadway after 30 phenomenal years, with no end in sight, I’m delighted that this spectacular new production of PHANTOM has been as well-received in the U.S. as the brilliant original and has already been seen by over 3.7 million people across North America since it opened in November 2013. With an exciting new design and staging, retaining Maria Björnson’s amazing costumes, the new PHANTOM is thrilling audiences and critics alike all over again. With the production continuing to be such a success, we are delighted to welcome our exciting new stars to keep the music of the night soaring for many years to come.”

Tickets for THE PHANTOM OF THE OPERA start at $35 (includes facility fee) and go on sale Sunday, October 14. Tickets can be purchased online at www.broadwayindetroit.com or www.ticketmaster.com, and by phone at 800-982-2787. Starting Monday, October 15, tickets will also be available for purchase at the Fisher Theatre and Detroit Opera House box offices. For group sales (12 or more) please email groups@broadwayindetroit.com or call 313-871-1132. Tickets for the open captioned performance may be purchased in person at the Fisher Theatre Box Office or by phone at 313-872-1000, ext. 0. Performance schedule, prices and cast are subject to change without notice.