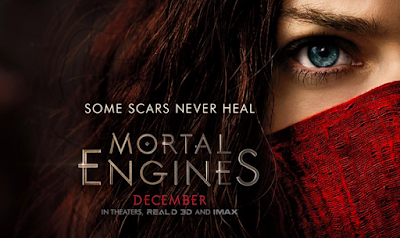 Read Ashley B's review of Mortal Engines. Hundreds of years after civilization was destroyed by a cataclysmic event, humankind has adapted and a new way of living has evolved. Gigantic moving cities now roam the Earth, ruthlessly preying upon smaller traction towns. Tom Natsworthy (Robert Sheehan)—who hails from a Lower Tier of the great traction city of London—finds himself fighting for his own survival after he encounters the dangerous fugitive Hester Shaw (Hera Hilmar). Two opposites, whose paths should never have crossed, forge an unlikely alliance that is destined to change the course of the future. 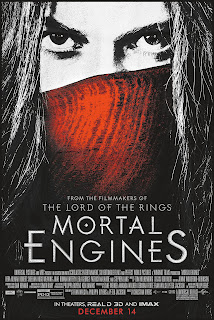 Mortal Engines is the futuristic film about the world after civilization was almost completely destroyed from war. The city of London is now mobile on wheels and sets out to destroy any other city in its path. Hester Shaw wants to stop the London reign of terror along with an Londoner outcast named Thomas. Can this book to film adaption avoid getting lost in translation or is it better left on the pages?

I am a big fan of storylines that deal with dystopias and was excited when I heard about this movie. The visuals were great to watch as the story took viewers into a world of fantasy and mystery around every corner. From the scenery to the costumes to the moving cities themselves plus everything in between, I was very interested in watching to see what would be next visual wise.

For the storyline itself I was not quite as interested because it seemed as though everything that happened could be guessed correctly in advance. So many parts of the plot were predictable and although it did not take away from the visuals it was still a bit frustrating. There were no real shocking plot twists in the story and it left more to be desired. This is especially true because there were several hints at something that could have taken viewers deeper into the fantasy world but instead left us at the surface.

If the plot went deeper into The Who, what’s and why’s of the post-war then this movie could have been better than it was. Instead it remained at the surface as a visually pleasing letdown of a story. Hopefully if they continue to release the movies based on the book order they learn from their mistakes in this one and give the audience a more in depth plot.