'Ben is Back' is top notch acting - Ashley B's Review 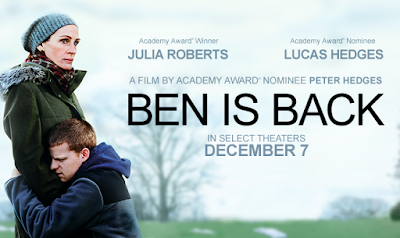 Read Ashley B's review of Ben is Back. 19 year-old Ben Burns (Lucas Hedges) unexpectedly returns home to his family’s suburban home on Christmas Eve morning. Ben’s mother, Holly (Julia Roberts), is relieved and welcoming but wary of her son staying clean. Over a turbulent 24 hours, new truths are revealed, and a mother’s undying love for her son is tested as she does everything in her power to keep him safe. Ben is Back also stars Courtney B. Vance (“The People V. O.J. Simpson: American Crime Story”) and Kathryn Newton (Lady Bird). 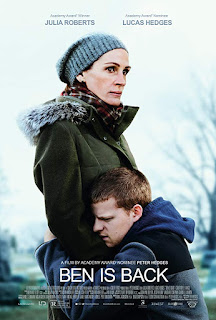 On the morning of Christmas Eve Ben (Lucas Hedges) shows up to his family’s home unexpectedly. Due to his drug habit, his family is wary about his visit but his mother Holly (Julia Roberts) is more welcoming to him surprising them. The next day the family is taken through an unsettling 24 hours that leaves you wondering how far does a mother’s love go?

It is not news that Julia Roberts is an amazing actress but she takes it up a notch in Ben is Back. Her love for Ben mixed with the idea that she wants to see her son as a “good kid” despite all he has put her through really tugged at my emotions. The raw emotion that she put into her character Holly was one of her best yet. Lucas Hedges is an actor to watch as well because although he still leans toward being a newcomer, he really delivered in this movie. Several times during the movie I was confused on what to believe that came out of his mouth because he did such an excellent job as portraying the characteristics of someone with a drug addiction.

Where this movie faltered is that it felt like it was separated into the first half being a family drama then the second half does a 180 flip into crime drama. If it hadn’t been for Roberts and Hedges then I would have lost interest after about an hour in. The acting did not deteriorate but the storyline did and I am not sure if the direction it went in was the best choice.

Regardless of the decreasing interest in the plot, the performances of the family was something worth watching. If you want to see Julia Roberts truly shine in her profession along with a newer actor who delivered as well then I recommend you get to a theater soon to witness Ben is Back.