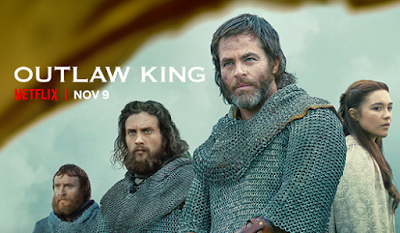 Read Will's review of Outlaw King. The untold, true story of Robert the Bruce who transforms from defeated nobleman to outlaw hero during the oppressive occupation of medieval Scotland by Edward I of England. Despite grave consequences, Robert seizes the Scottish crown and rallies an impassioned group of men to fight back against the mighty army of the tyrannical King and his volatile son, the Prince of Wales. Filmed in Scotland, OUTLAW KING reunites director David Mackenzie (Hell or High Water) with star Chris Pine alongside Aaron Taylor-Johnson, Florence Pugh and Billy Howle. 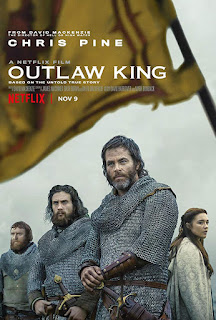 Outlaw King is a violent, graphic movie that basks in the raw, brutal reality of the end of the middle ages. Set in Scotland in the 14th century, centering around Robert the Bruce (Chris Pine) a Scot, has to pledge fealty to the King of England (Stephen Dillane), on the advice of his father. The warring factions of Scotland have put their differences aside for the sake of their people, who had to endure tragedy, war and loss in the years prior. In the time that follows, Robert Bruce marries an English noble, Elizabeth de Burgh (Florence Pugh). There is even a William Wallace mention for you Braveheart fans. While things are fine for a while, there is civil unrest after an incident and a rebellion begins.

After this was screened at the Toronto International Film Festival, director, David Mackenzie decided to trim twenty minutes and re-edit the film with a shorter two hour runtime. The original cut I felt was too long, dragging at times and now seeing the public version, it was the right choice and mainly saves the movie. This means that in large part, the momentum is kept up from the impressive one-shot that begins the film through to the preparation for the final battle.

The battle sequences bounces between fluid motion and montage to create sheer visceral affect, and has the resounding weight of death left in its wake. Between gory, muddy battle sequences and a strong central pairing between Chris Pine and Florence Pugh. Pugh in particular, since Lady Macbeth, has only gone from strength to strength and her robust and intelligent character is crucial for the heart of the film.

Edward, the Prince of Wales (Billy Howle) is a bowl haircut wearing, Game of Thrones wannabe antagonist. He has all the traits of his father except for his mercy. But these clear structures make Outlaw King easier to access and follow. Also, James Douglas (Aaron Taylor-Johnson) is a noble man who joins Robert the Bruce who is out for revenge and has a killer catch phrase.

Outlaw King is Netflix’s attempt at making a big scale epic story and for the most part it works. The final battle is as epic and dirty as a historical war film. The cinematography and the landscapes of Scotland were beautiful. This deserves to be seen on the big screen but unfortunately it will lose a lot of its grandeur by being seen on a laptop screen. This is a definite recommend when this pops up in your Netflix queue.