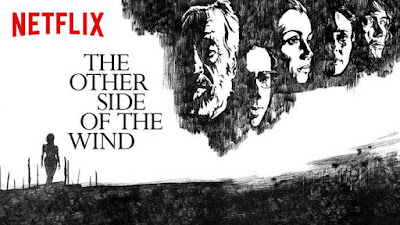 Read Will's review of The Other Side of the Wind. The Other Side of the Wind tells the story of famed filmmaker J.J. “Jake” Hannaford (Huston), who returns to Hollywood after years in self-exile in Europe with plans to complete work on his own innovative comeback movie. A satire of the classic studio system as well as the new establishment who were shaking things up at the time, Welles’s final film is both a fascinating time capsule of a now-distant era in movie making as well as the long-awaited “new” work from an indisputable master of his craft. 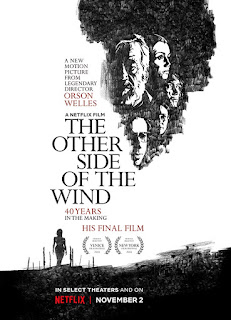 The Other Side of the Wind is in select theaters on November 2nd, 2018.

The fabled lost film of Orson Welles. There may not be a movie with a weirder backstory to come out for some time. 40+ years after his most recent narrative feature, this was compiled from footage shot in the mid-70s, The Other Side of the Wind is from the mind of legendary filmmaker Orson Welles.

When he died fifteen years later, the film was not only unfinished but in legal limbo. The Other Side of the Wind has finally been completed by Welles’s collaborators. Once legal and production issues were solved, which got it to the finish line. The only thing left to do is watch it and make sense of what there is.

On one hand, I'm happy this film got completed in some form. On the other hand, it's as interesting a film as you can make from tedious ideas. Maybe now that this can be seen, we can also retire films from here on out meant to de-mythologize the macho filmmaker that I’m not entirely convinced are all that probing.

The titular film within the film is about as dense and batty as it is psychedelic and beautiful and features some truly masterful shots, perfectly reflecting the talented, but solvenly and pretentious nature of John Huston’s director-character behind it. It moves back and forth between a film viewing party and the film within the film, each half reflecting and informing the other. I was more interested in the form than anything else, but there's still a sense of this film being constructed by different hands.

I wish I could be more enthusiastic about this and feel others will be more than me. Sometimes, a movie is there more to be admired as an object than one that gets under the skin.