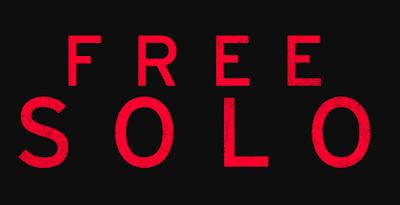 Read Will's review of Free Solo. Free Solo is a stunning, intimate and unflinching portrait of freesoloist climber Alex Honnold, as he prepares to achieve his lifelong dream: climbing the face of the world's most famous rock ... the 3,200-foot El Capitan in Yosemite National Park ... without a rope. 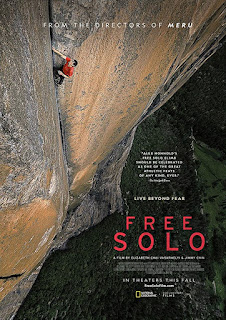 FREE SOLO is an edge-of-your seat thriller and an inspiring portrait of an athlete that showcases the extraordinary capacity of the human body to push itself to the extreme.

A National Geographic documentary, directors Jimmy Chin and E. Chai Vasarhelyi have set out to follow a veteran rock climber Alex Honnold, who’s specialty is to climb without a rope, also known as free soloing. We watch as he prepares to achieve a lifelong dream of his, which is to free climb the face of the 3,200-foot El Capitan in Yosemite National Park. Celebrated as one of the greatest athletic feats of any kind, Honnold’s climb set the ultimate standard: perfection or death. To succeed in this challenge places his story among the pinnacles of human achievement.

I am deathly afraid of heights so to watch this was one of the most tense viewing experiences I’ve had in quite some time. Chin and Vaserhelyi nonetheless manage to convey a palpable sense of fear and tension throughout, as Honnold repeatedly practices climbs in preparation for his free solo climb of Yosemite's famed El Capitan. Honnold makes for a interesting subject as the climber at the heart of the story. As I mentioned before, unlike literally 99% of other climbers, he climbs without using ropes or any other sort of protection. What he does is insane, and the film repeatedly stresses the fact that you have to be on your best game or you die. But Honnold's passion for free soloing is his lifeblood, and despite the inherent dangers of his profession, it's the one thing that keeps him going.

As he begins training for his most important feat, the armor of invincibility that he’s built up over decades of climbing unexpectedly breaks apart when Honnold begins a new relationship, threatening his focus and giving way to injury and setbacks. This documentary eradicates all doubt of the unparalleled and possibly impossible nature of this task. Amid exhaustive practice runs, the fine-tuned camera angles expose teeny flaws on the granite face, fractions of an inch to which Alex's fingers and shoes will somehow cling on. The map of his planned ascent is a glossary of the trickiest maneuvers in free solo rock climbing and has to be done with the utmost precision.

Vasarhelyi and Chin are able to beautifully capture deep human moments with Honnold and his girlfriend and gives a little levity to the situation at hand. The death-defying climb is shown with exquisite artistry and masterful, vertigo-inducing camerawork. One of the things that worried me was that the cameras would cause a distraction while he is climbing unprotected but it was carefully done and Honnold had full say in what could be filmed.

My palms were sweaty just watching this documentary. Visually stunning, emotionally grounded, and has some moments of laughter. If you’re looking to see something incredible, this is definitely something you should watch.