The Captain is Gruesome - Kelsi Review 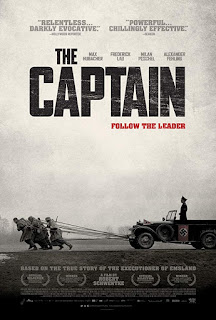 Read Kelsi's Review of The Captain. Based on a disturbing true story, The Captain follows Willi Herold (Max Hubacher), a German army deserter who stumbles across an abandoned Nazi captain’s uniform during the last, desperate weeks of the Third Reich. Newly emboldened by the allure of a suit that he stole only to stay warm, Willi discovers that many Germans will follow the leader, whosoever that happens to be. A parade of fresh atrocities follow in the self-declared captain’s wake, and serve as a profound reminder of the consequences of social conformity and untrammeled political power.