Mamma Mia! Here We Go Again is Once and Done - Logan's Review

Read Logan's review of Mamma Mia! Here We Go Again. You are invited to return to the magical Greek island of Kalokairi in an all-new original musical based on the songs of ABBA. With the film’s original cast returning and new additions including Lily James (Cinderella, Baby Driver), the musical comedy will open on July 20, 2018. 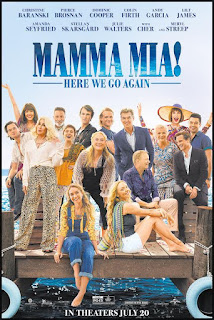