Mind on Movies is very excited to announce that we are working on the upcoming release of LOVING VINCENT, to giveaway a Limited Edition Van Gogh Oil Colour Sets ($65 value) ! 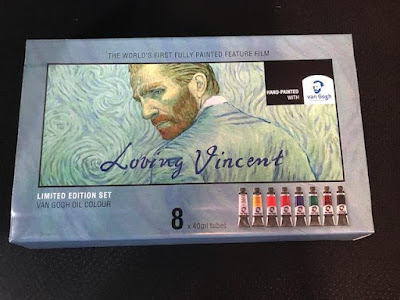 LOVING VINCENT is the world’s first fully oil painted feature film. Bringing the paintings of Vincent van Gogh to life to tell his remarkable story. Every one of the 65,000 frames of the film is an oil-painting, hand-painted by 125 professional oil-painters who travelled from all across the world to the Loving Vincent studios in Poland and Greece to be a part of the production.

France, Summer 1891... After hearing that Vincent van Gogh killed himself, Armand Roulin (Douglas Booth), is given a letter from Vincent by his father, Postman Joseph Roulin (Chris O’Dowd), to hand-deliver to the Theo van Gogh, Vincent’s brother. In Paris, there is no trace of brother Theo. Armand’s search leads him to the paint supplier, Pere Tanguy (John Sessions), who tells him that Theo died shortly after Vincent, apparently destroyed by the death of his older brother. Pere Tanguy recounts how Theo helped Vincent on his incredible transformation from a down-and-out at age 28 to the new artistic sensation of Paris at the time of his death 10 years later. After hearing this story Armand believes he may have misjudged his father’s friend, and really wants to know why Vincent chose the moment of impending success to take his life: Pere Tanguy has no answer to this.

Armand then journeys on to Vincent’s final destination, the quiet village of Auvers-sur-Oise to meet Doctor Paul Gachet (Jerome Flynn), Vincent’s doctor in his final weeks. He stays at the Ravoux Inn, where Vincent boarded for the last 10 weeks of his life, and where on July 29, 1890 he died of a bullet wound to his abdomen. Armand meets the Inn- keeper’s daughter, Adeline Ravoux (Eleanor Tomlinson) and also conducts interviews with Doctor Gachet’s housekeeper, Louise Chevalier (Helen McCrory), the Doctor’s daughter, Marguerite Gachet (Oscar nominee - Saoirse Ronan). Down by the river where Vincent often spent his days, he meets the Boatman (Aidan Turner).

Armand gets the sense that much is being hidden from him by the villagers and is determined to root out the truth. A run in with the local police, a chance encounter with a second Doctor, and finally his much anticipated meeting with the mercurial Doctor Gachet, lead to unexpected and heart- rending revelations. Armand then finally understands and appreciates the passionate and surprising life of Vincent van Gogh.

LOVING VINCENT will be playing at the Detroit Institute of Arts on October 14th and 15th 2017.