Enter to win THE BOSS BABY on Bluray!

Mind on Movies is very excited to announce that we are working with Twentieth Century Fox Home Entertainment on the upcoming Bluray release of THE BOSS BABY. 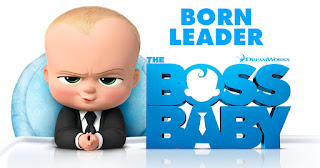 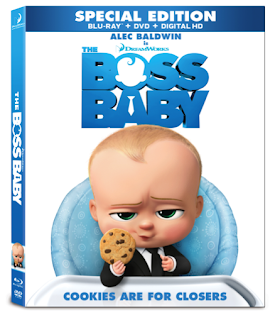 DreamWorks Animation invites you to meet a most unusual baby when THE BOSS BABY, the “wildly funny” adventure comedy of the year arrives on Digital HD July 4 and on Blu-ray and DVD on July 25. Seven-year-old Tim Templeton suddenly finds his share of parental love plummeting when his new baby brother (Alec Baldwin) arrives — wearing a suit and toting a briefcase — and makes it clear to everyone that he’s in charge. But when Tim discovers that Boss Baby is on a secret mission, he reluctantly agrees to team up with his pint sized sibling for an epic adventure that might just change the world!

From the director of the hugely successful Madagascar franchise, Tom McGrath, comes a hilarious adventure-comedy about family and belonging. In addition to Alec Baldwin, THE BOSS BABY features the voice talents of a stellar cast including Steve Buscemi, Jimmy Kimmel, Lisa Kudrow, Miles Bakshi and Tobey Maguire.

THE BOSS BABY SPECIAL EDITION comes loaded with bonus features including the NEW Mini Adventure, a 3-minute action-packed journey through time featuring Boss Baby and Tim. Join the fun as Boss Baby and Tim battle pirates, travel through outer space, swim deep into the sea, and go toe-to-toe with some ferocious dinosaurs! Additional bonus materials include featurettes like “Cookies are for Closers: Inside BabyCorp,” Deleted Scenes and more!